The precise range that Jaguar’s new I-Pace electric SUV will get from its battery system is now known, courtesy the EPA (Environmental Protection Agency) in the U.S. The model’s 234-mile (377-km) range is a little less than the 240 miles (386 km) the company had hoped for, but the EPA tests were clear.

Still, even at 377 km, the vehicle’s range is pretty decent. For one thing , it puts the I-Pace within the norm for electric vehicles, right alongside vehicles as varied as the Tesla Model X and the Chevrolet Bolt.

One oddity with the results is that, while the I-Pace’s batteries muster a range that’s nearly identical to what’s available from Tesla’s Model X 75D de Tesla, they are actually bigger, at 90 kWh, than the Tesla battery pack, which has a capacity of 75 kWh. What’s more, the I-Pace is a lighter vehicle. These factors should in theory give the Jaguar the edge in terms of range, but in fact it’s not so. 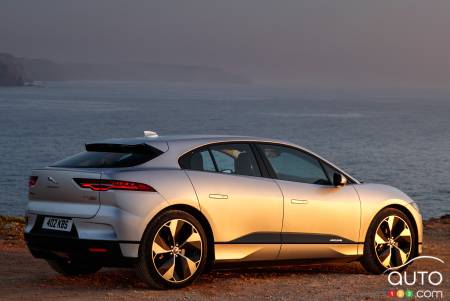 Jaguar has not said anything officially in response to the EPA data.

It’s very possible, furthermore, that Jaguar will make like Tesla and introduce a higher-capacity version of the electric SUV at some point.

Another oddity worth noting here is that European testing for the I-Pace resulted in an official battery range of 298 miles, or 480 km.

We’ll learn more about the vehicle’s actual, real-world range when it debuts, of course. And it’s worth repeating that official range is one thing, but the style of driving and types of routes driven can have quite an impact on the actual range a particular vehicle delivers.

In other words, playing with numbers and comparing the official capabilities of different models is all fine and good, but a lot of these new electric models may well end up delivering very similar range performance.

2019 Jaguar I-PACE Review: The One They’re All Talking About

We test drive a Jag like no other, at least there hasn’t been one like this until now. The all-electric 2019 Jaguar I-PACE and its (official) 375-km range de...