There were comments. Ohh, there were comments alright. The F-150-driving father and his MINI Cooper-driving daughter; the BMW i8 owner; the husband-and-wife duo. Everyone wanted to know about the Jaguar I-PACE, currently the talk of the town both in the automotive world and, it would seem, in my hometown of very EV-friendly Vancouver, BC.

Unsurprisingly, the styling was a big draw. It starts with the bright orange paint for sure (Jaguar calls it “Photon Red”; don’t ask), but continues with the narrow headlights and taillights, swooping roofline and fantastic two-tone rims, one tone being a carbon-fibre finish. Lovely.

A Jag like no other
The main thing, it seemed, was that very few people identified it as a Jag, even though the manufacturer went through a major styling resurgence about 10 years ago. The I-PACE, however, stands out from the rest of that lineup too, which is something it probably has to do considering its all-new and much-ballyhooed all-EV digs.

What you see here is the top-spec $99,800 HSE version (seems Jaguar has turned to its Land Rover partner for its trim nomenclature), which joins the S ($89,800) and SE ($95,800) trims and adds Windsor leather seats, foot-activated tailgate, those gorgeous 20-inch rims and Meridian surround sound. 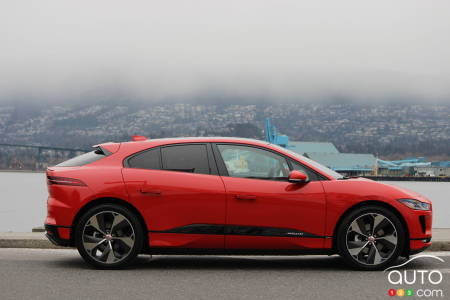 Be forewarned, however: the steep hatch that gives it such a great profile does make for some visibility challenges since the rear window is mounted at such an aggressive angle. You also won’t want to pile your cargo too high and to be sure to make use of the secondary storage bin under the hood; it’s not huge, but it will fit a weekend bag. The rear seats are split 60/40 and fold almost flat, so there’s more room to be found there.

While I was pleasantly surprised by how much legroom remained in the front passenger seat when I installed a rear-facing child seat behind it, you may have a hard time folding the 60 portion of the rear seat if you have a child seat installed as it tends to migrate over to the folding portion, blocking its progress. If you want to be able to fold the seat and have a child seat back there, it will have to stay mounted behind the driver.

The interior
Inside, it’s a tantalizing mix of both Jaguar and Land Rover styling-wise; the gauge cluster, steering wheel and seats are very Jag-esque, while the two screen infotainment system reminds of the Land Rover Range Rover Velar. Which, of course, is no bad thing as it has finally brought JLR up to speed with the rest of the luxury car world when it comes to infotainment. It’s fast, it looks good and it contains a wallop of info across both its screens. I love being able to watch my EV-ness (power flow, remaining charge, etc.) on the upper screen, and navigate through my music on the screen below – there’s support for both Apple CarPlay and Android Auto, and my CarPlay apps worked flawlessly. That’s not something you can always say about the system, especially if we’re talking about Google Play Music. No problems here, though.

The climate control knobs are also digital displays, and what’s displayed on them changes depending on whether you’re adjusting your seat temperature or digital climate control. It’s a slick set-up that does well to channel the futuristic exterior. 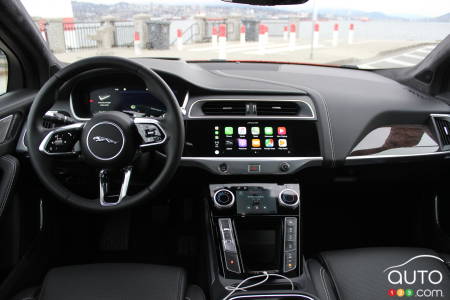 I guess the one thing I would ask for is slightly less text on some of the upper screen displays; the home screen has just three cells to choose from – navi, audio and phone – but swipe it right, and you get a very text-heavy menu for other apps.

Among those apps is the EV configuration system, which is where you’ll find the option to either set your brake regeneration level to low or high. This may seem trivial, but set it to “high” and the car slows once you release the throttle at a rate that will have you going from normal speeds to a virtual stop in a matter of seconds. It’s quite aggressive, and you’ll want to be sure to leave it in this mode only when in slow traffic. Switch to “low”, and the experience is a much more predictable one.

In addition to a power flow gauge (also located in the gauge cluster, if you wish), the upper screen is also where you’ll see the display that actually breaks down how each element is taxing the system – from your climate control to your heated seats. Turn one element off, and the display changes its expected range. It’s a neat touch, and one that I actually found myself making use of.

There’s range, and there’s range
You see, while the I-PACE is rated at about 375 km in the best of conditions, when I picked my tester up its battery was topped up, but only showing about 310 km. I didn’t have the HVAC cranked, no seat warmer, no windshield warmer - it seems the driver before me had driven in such a way that the system thinks will only allow for 310 km, because it can “learn” your driving habits. 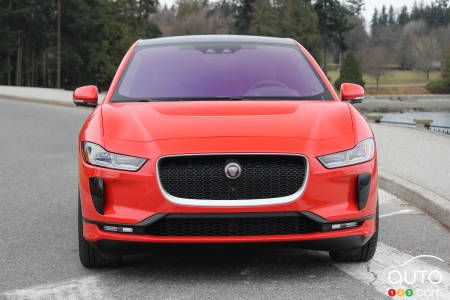 Either way, it made me stop and think to the point where I didn’t go as far on my regular test drive as I normally would because I was pretty sure I wouldn’t make it. By the time I’d returned home with just 30 km left on the clock (after starting with said 310 km and only driving about 161 km), I was glad I’d made the choice. I was also glad to be home because I was cold, because I had switched to ECO mode and switched off the HVAC. Some of the blame should be leveled at the winter tires I was on, but that’s a pretty big gulf nonetheless.

On the road
The drive I did was mostly on highway and through mountainous terrain, two factors that will tax any EV, and especially one like the Jag that drives so darn well it becomes very hard to drive it in an EV-responsible way, especially if you activate dynamic mode. Do that, and you’re treated to a world of 50-100 km/h sprints that take about two seconds, and have your head snapped back against the headrest, your ribs pushed firmly into the (thankfully) high-bolstered sport seat that comes as standard.

Yes; that will affect your range but when it’s this much fun, well, it’s just hard to say no. This is an insanely (some might even say “ludicrously”) fast vehicle that really is a neat indicator of what an EV powertrain can do; because it’s a direct-drive transmission, power comes as soon as you tip in and you need to hold on tight because that wave of acceleration comes at such a great clip.

The handling, meanwhile, is sharp, undoubtedly helped by the low centre of gravity provided by the EV powertrain mounted low into the floor. Body roll – especially in Dynamic mode – is pleasingly reduced, and even the fastest turn transitions – often the cause of body roll thanks to shifting weight – are well-handled. It’s not hard to see why Jaguar saw fit to make a one-model race series featuring the I-PACE. 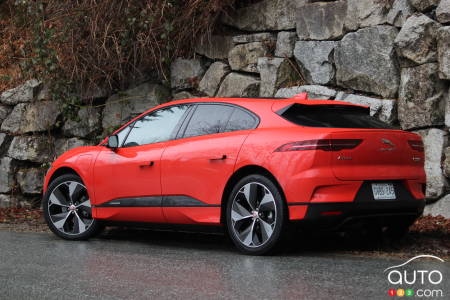 Then, when it’s time to slow things down a little, the ride is quiet and comfortable, like a luxury vehicle should be. Most around down cracks and creases are handled with ease thanks to properly-tuned damper settings and insulative suspension bushings. The I-PACE may look fast, but it can just as easily adopt a more loping attitude. I also watched the range expand in these circumstances; at one point, I was only using a km of range for every 2 km driven. It was a short experience, but for people that are going to spend most of their time in the I-PACE at around town speeds – and that will likely be most people – it should provide some solace.

Patience
Also providing some solace is the existence of Level III chargeability; it even comes with two cable types. With big range comes big charge times, as we experienced: getting from 10%-80% took us about 7 hours 45 minutes on a Level II charger. Chances are most EV drivers will never let it get that low, but it’s just another thing to consider if you’re thinking of taking the I-PACE on drives outside of the city.

In the end, though, I was really disappointed that I wasn’t going to be able to complete my usual test route, since I was enjoying myself behind the wheel so much. The portion I had to skip involved some tight, tricky turns that are always fun to attempt in a sports car and while the I-PACE may not be that, it’s a very rewarding drive nevertheless and I just wanted more of it. I guess all I need to do is talk to the municipality in which that road is located, and get them to drop a Level III charger right at the beginning of it. 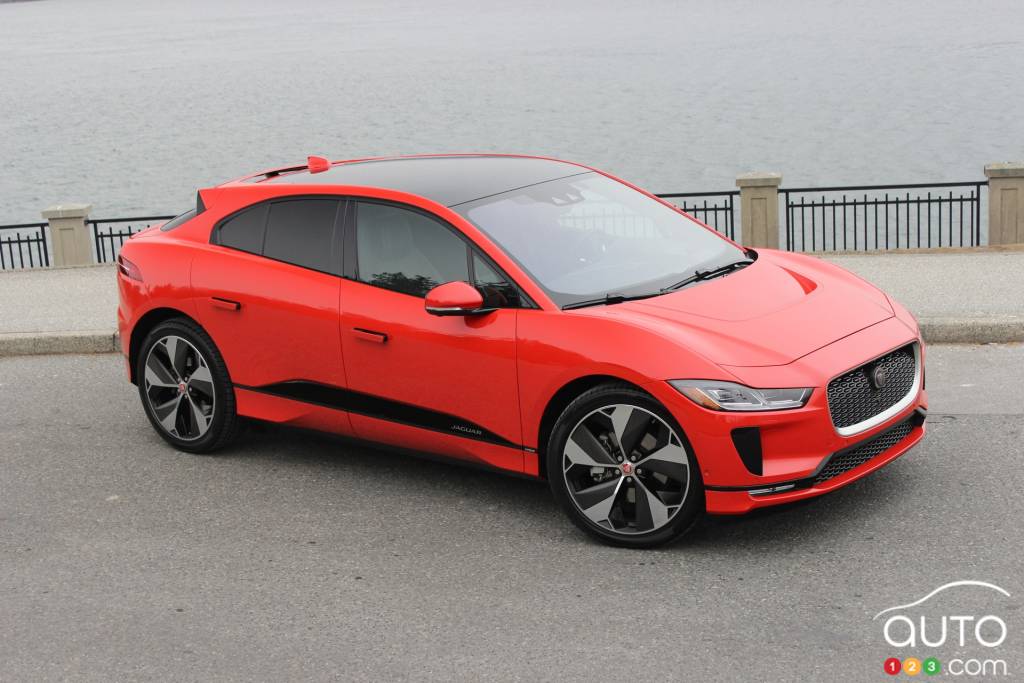 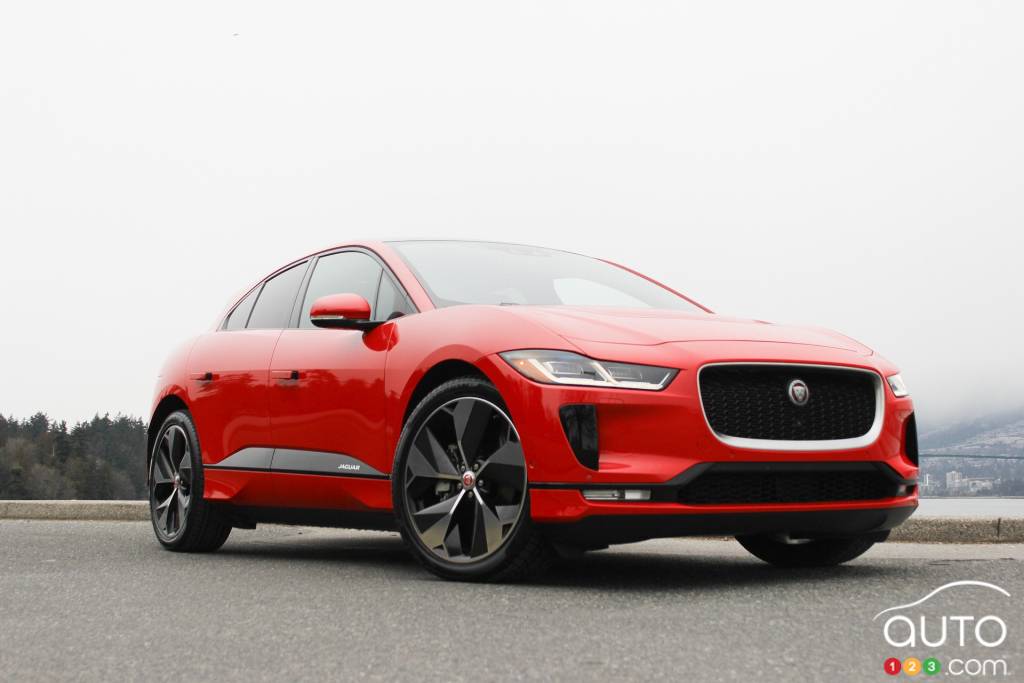 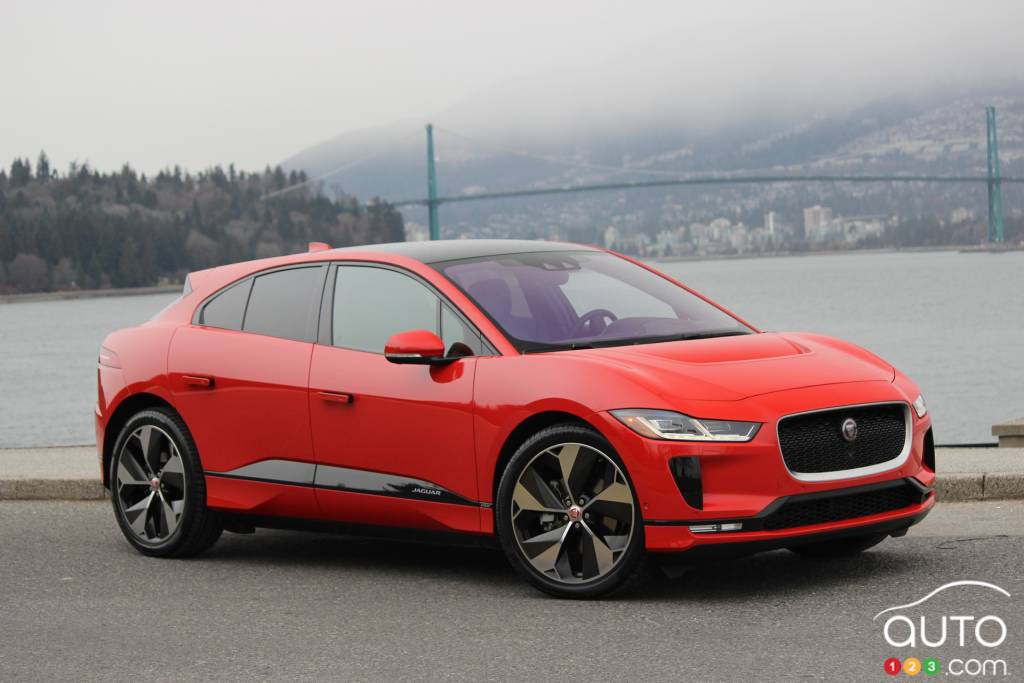 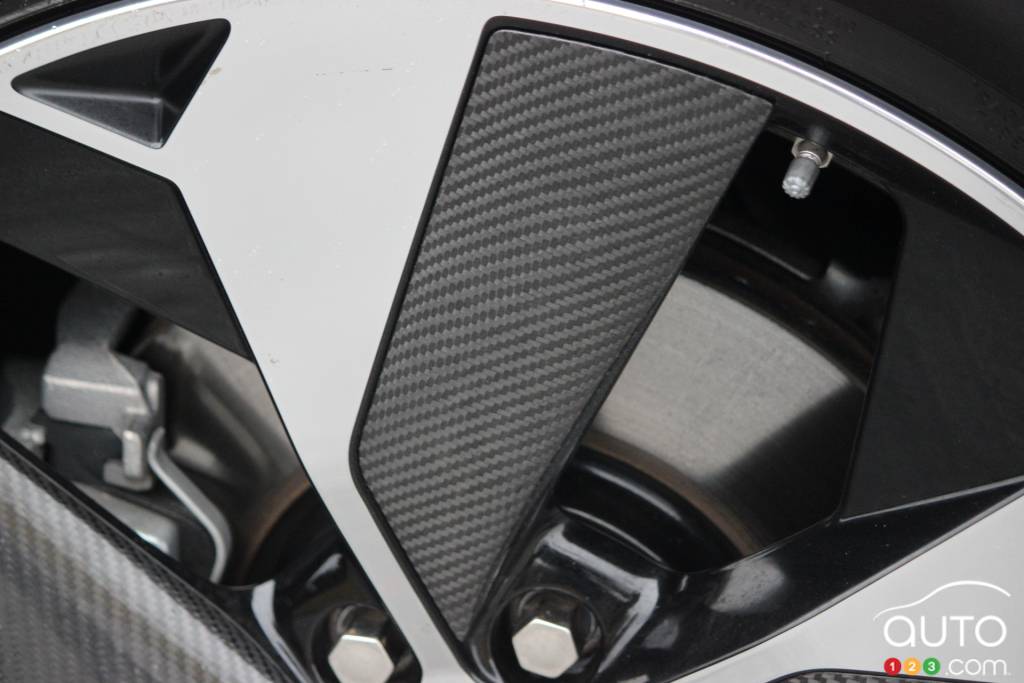 Courtesy the EPA, we now know the precise (or precise-ish) range of Jaguar’s new I-Pace electric SUV. Testing has determined it can go 234 miles (around 377 ...