In May of 2017, Chevrolet lifted the veil on the ZR2 of its Colorado pickup. Yours truly was on hand for the launch which took place in… wait for it… Colorado. The event gave us the opportunity to test out the new rugged new version, and suffice to say that it fairly blew away all those who were on hand.

The ZR2 edition of the Colorado is one serious off-roading truck.

Fully aware of the strong interest in these types of vehicles (and no doubt mindful of the tidy profits that come with them), Chevrolet is now readying to unleash another, even more unbridled version of the ZR2 on the world, which will be dubbed the ZR2 Bison. According to automotive website Autoguide, the new truck will be built in collaboration with the American Expedition Vehicles (AEV) group.

The Bison could be among us sooner rather than later, possibly before the end of the current calendar year as a 2018 model. 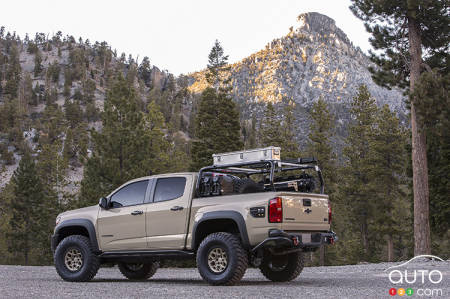 It is essentially a ZR2 to which will be added/substituted 35-inch BF Goodrich KM2 Mud Terrain tires, new bumpers and protection plates under the body, and beadlock-type wheels, among other features. At least, this is what was visible on Chevy’s ZR2 AEV concept truck presented at the SEMA show in the fall of 2017.

Autoguide reports that Chevrolet has filed a request to reserve the name ZR2 Bison; it claims this information was leaked to it by a dealership that had been put in the loop. That dealer also mentioned that the Bison will look very similar to the concept seen at SEMA, with the exception of some equipment like the tuba that allowed the engine to breather under water. Nothing says that some of these items won’t appear on the list of available options, of course.

In terms of mechanics, it’s expected the Bison will come with two available engine choices: a 2.8L diesel and a 3.6L V6 gasoline engine. What’s also expected is a price point that will easily surpass the $50,000 mark.

Chevrolet aims to please fans of trucks and of modified vehicles ahead of the SEMA Show with its announcement that it will produce two editions of the Colora...

Unveiled in Los Angeles last November, the new Chevrolet Colorado ZR2 midsize truck designed for off-road driving will be in the hands of buyers starting in ...

A Trail Boss Package for the 2022 Chevrolet Colorado

Chevrolet is adding a Trail Boss package to the Colorado product offering for 2022. The package actually consists of a set of components and elements, which ...