As we start to see the offer of electric cars multiply on the market, the day is approaching when we might see the same happen in the pickup segment. Already Tesla, Ford, GM and Rivian have expressed a commitment to producing an all-electric truck. To that list we can now add Fisker.

In the case of that company, we’re talking long-term however.  The revived company with an electric-focused mission statement has only presented one vehicle up to now, the Emotion sedan.

We know the company is also preparing an SUV; after that, the company is planning two other products, including a pickup. The latter as alluded to in a tweet sent out by Henrik Fisker, who explains that all vehicle segments would need to be electrified, and that after Fisker’s SUV is born, the two models to follow that have been decided on.

He also included a computer-generated teaser image that clearly shows the back end of a pickup, adorned with larger FISKER letters.

Also noteworthy in Henrik Fisker’s tweet is the revelation that the two new products will ride on the same platform. We don’t know what the second of the two products is, but we can imagine a product destined to take on the other model being developed by Rivian, the R1S SUV.

The prospect of a 100% electric pickup truck from Fisker is an intriguing one, for sure, but the fact is such a product would enter a segment already populated by other models. Tesla has committed to producing a truck, and American giants GM and Ford have promised to produce their own electric pickups. Then there’s Rivian and its all-electric truck, now in development and set to debut in the flesh next year. .

While at this point in time it’s still not possible for consumers to buy an electric pickup, that time is coming soon, and given the potential for profits in the truck categories, the competition will be fierce. Expect other companies to throw their hats in the ring as well. 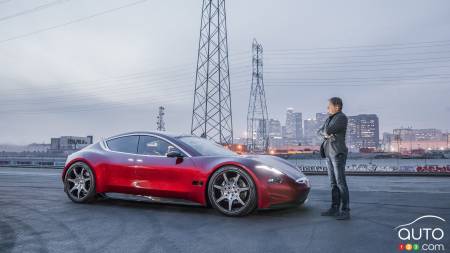 Fisker confirms plans to take direct aim at Tesla and its Model 3 with an all-electric SUV with a range of 480 km and a starting sticker price of around $40,...

Ram’s All-Electric Pickup Teased, Will Be Presented This ...

Ram has teased a new image and short video of its electric pickup and confirmed it will introduce the model for the first time next fall. It's unclear if the...

GMC has shared a first teaser image showing the front end of its upcoming electric Sierra pickup. The model is expected to be available in 2022 as a 2023 mod...