The Lucid Air all-electric luxury sedan, due to debut officially on September 9th, is showing increasing potential. Its opulent interior, cutting-edge technology, generous range and impressive top speed make it attractive, but also competitive in an environment where all those elements are promised by the big carmakers.

Already, the model had demonstrated its capabilities in terms of autonomy with a range of 600 km. New tests carried out have brought this figure to 832 km.

This result is not official data from the EPA (Environment Protection Agency). However, it was obtained in an independent test conducted by FEV North America at its Technical Center in Auburn Hills, Michigan. Importantly, it follows EPA procedures, which suggests that the model will offer a similar result once it hits the market. It would then become the leader in the industry in terms of range.

This is an effective way to make a statement. In fact, this may be the only way, because with so much competition a new player can't afford to follow the group; they must lead it. 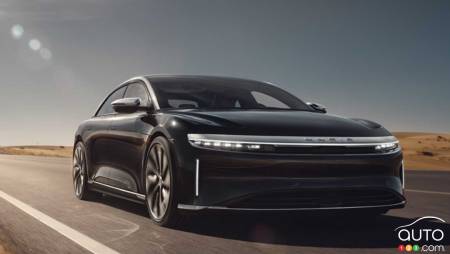 Peter Rawlinson, CEO and CTO of Lucid Motors, credits a number of features and systems with the model's impressive range. In his view, it's not just a question of battery capacity. “I believe that our 900-volt architecture, our race-proven battery packs, miniaturized motors and power electronics, integrated transmission systems, aerodynamics, chassis and thermal systems, software, and overall system efficiency have now reached a stage where they collectively set a new standard and deliver a host of ‘world’s firsts,” he stated.

As for the actual size of the battery of the model that was used in the test, it remains a mystery. A spokesperson for Lucid Air told Autoblog: "We have not announced the specific size of our battery pack, but I can tell you that while we originally stated back in 2016 that the Lucid Air would have a 130 kWh pack, it’s gotten considerably smaller since then."

This is interesting and intriguing.

Last February, Lucid previewed the Dream Edition version of the upcoming Lucid Air. The latter was due to be unveiled this past April at the New York Auto Show, which was of course cancelled due to the coronavirus. The company has been accepting deposits of $1,000 for the car since December 2019. The regular version of the model will reportedly sell for around $60,000 US. A version with a more powerful and capable battery pack could bring up the price to over $100,000. In return for such a sum, the latter could offer a drivetrain delivering around 1,000 km and be able to sprint to 100 km/h in about 2.5 seconds, with a top speed or over 300 km/h.