•    Mercedes-Benz will build a global high-power EV charging network, with over 10,000 chargers planned.

•    The company will start on the network first in North America, this year.

•    The network will be established also in Europe, China and other key markets.

Mercedes-Ben has announced a plan to build a world-spanning charging network for EVS, which will eventually include more than 10,000 chargers in North America, Europe, China and other key markets.

The company is focusing first on building the network in North America, and it hopes to have it complete worldwide by the end of the decade.

The system will give Mercedes-Benz owners preferential access to the network, allowing them to pre-book a charging station from their car, for example. But crucially, it will also be accessible to owners of all vehicle brands (as long as the vehicles have compatible equipment).

The automaker plans to install the stations in key cities and urban population centres, close to major arteries and at convenient retail and service destinations. Participating Mercedes-Benz dealerships will also feature the chargers.

For the North American rollout, Mercedes is partnering with MN8 Energy, a major company in the field of solar energy and battery storage, and the ChargePoint EV charging network technology company. By 2027, a network totalling more than 400 hubs across North America with more than 2,500 high-power chargers is planned. 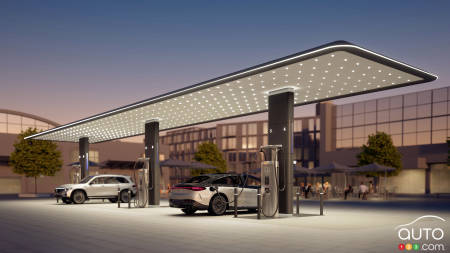 Each of the network’s charging hubs will offer between four and 12 chargers, with some featuring as many as 30. The high-power chargers come equipped to deliver up to 350 kW of charging power.

Intelligent charge-load management will allow each vehicle to charge at its maximum capacity keeping waiting times to an absolute minimum. Where feasible, charging points will be covered for protection from the weather, and Mercedes says wherever possible locations will be chosen so that users can go to nearby food outlets and restrooms is desired.

To finance the creation of the North American network, Mercedes and MN8 will be contributing roughly equally to an investment totaling a little over 1 billion Euros, or over $1.05 Billion USD over the next 6-7 years.