Signs of an industry in flux: The same week that we learn of Ford’s decision to pull the plug on nearly all of its sedans, Toyota announces it is injecting $170 million USD in its assembly plant in Blue Springs, Mississippi. The investment will allow for updating the production line so the plant can assemble the next-generation Corolla next year.

The best-selling car in the history of the automobile is going to be on its 12th generation. The new Corolla will be built on the company’s new Toyota New Global Architecture (TNGA) platform, a move that will require retooling of the Mississippi plant’s production line - hence Toyota writing its substantial cheque. The modernization will also allow the plant to produce Corollas at a greater pace. The investment brings with it 400 new jobs over the next 12 months.

"We will be able to respond quicker and be more flexible in order to meet market demands down the road." 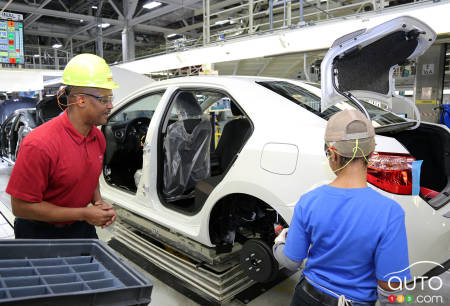 There’s a Canadian connection to Toyota’s decision to update its Mississippi plant to accommodate the new Corolla. Part of the production of the Corolla that has been taking place at the Toyota plant in Cambridge, Ontario is being transferred south of the border so that the Cambridge facility can join with Toyota’s Woodstock, Ontario plant to assemble more RAV4s.

The new influx of money brings Toyota’s total investment in the Blue Springs facility to over $1 billion since 2007. Toyota has promised to inject $10 billion in all in its American facilities within the next five years. Over the course of the past 60 years, the Japanese automaker has put some $25 billion of it money into projects in the U.S.

Toyota is recalling the 2019 Corolla Hatchback over a potentially faulty continuously variable transmission. The CVT’s torque convertor is prone to breakage,...