Volkswagen is busy with concepts at this week’s New York International Auto Show, but unlike with a number of prototype presented over the past few years, some of these are quite likely to make it to production in the foreseeable future.

This is particularly so for the Atlas Cross Sport Concept. We reported previously on the likelihood of a five-seat version of the Atlas debuting in NYC; here, with a slightly different name, it is.

The model is a strategically important one for the Volkswagen Group, still attempting as it is to win back the hearts and minds of North American consumers and claw back market share. There’s no more clear-cut way to do this than to tackle the SUV segment, which along with pickups is a big favourite among consumers on this side of the Atlantic.

The new Atlas Cross Sport Concept is in fact quite clearly designed specifically with the American market in mind. There are unmistakable similarities with the Ford Edge, for example, particularly in the rear.

While it carries the Atlas name, and has the chassis and wheelbase as its stablemate, the new prototype is shorter by about 17 cm. Translation? Interior space is therefore the same in the current Atlas and the new concept, but the latter gets less cargo space.

The concept as presented is partially electric thanks to the presence of two motors. The first, devoted to the front, provides 54 hp and 162 lb-ft of torque; the second delivers 114 hp and 199 lb-ft to the rear wheels. The total output produced by this configuration is 355 hp (276 of those from the 3.6L V6 engine). Energy is stocked in am 18 kWh lithium-ion battery.

Word at the NYC show is that production is about a year or two away; the base model will get only a gasoline engine. We’ll have to wait and see if the hybrid component survives the development process.

The VW Tanoak
The other concept revealed by Volkswagen today is also derived from the Atlas. A pickup with a clear resemblance to Honda’s Ridgeline, the Tanoak is powered by a 3.6L V6 engine, but with no electric motor in sight. The powertrain does, however, get the 4Motion all-wheel drive system.

We should point out that this here is a prototype still quite a ways from getting anywhere near production. In fact Volkswagen specified in its press release that there are, for the moment at least, no plans to develop the Tanoak into a production-ready model. The reaction the pickup gets from the press and members of the public in New York may go some way in pushing the decision-making one way or the another… 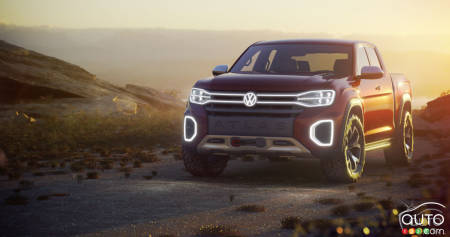 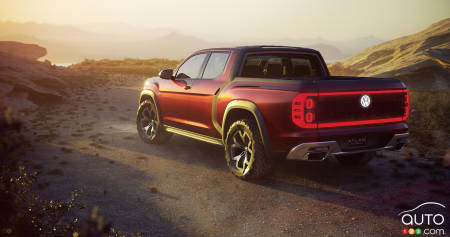 The 2019 Volkswagen Atlas, an efficient, elegant people-mover able to take in 6 or 7 passengers in comfort. Just pay no mind to the plastic around you. If yo...