A rare 1954 Aston Martin DB3S that was once driven by legendary race car driver Stirling Moss, Peter Collins, and Roy Salvadori will be auctioned off by Bonhams on May 21st and could sell for a whopping £6-7 million ($11-12.8 million CAD).

You may remember it from the 1960s movie School of Scoundrels.

This Aston Martin DB3S is quite an extraordinary story. Originally built as a personal road car for David Brown, the multi-millionaire industrialist who owned Aston Martin (hence the first two letters), it was used by the brand’s Competitions Department to replace one of the three cars that were destroyed in a series of crashes during the 1954 Le Mans 24-hour race.

The DB3S was given an aluminum body shell and upgraded to full Works specification. It never returned to David Brown’s personal ownership, and instead went on to participate in some of the world’s most prestigious races before finishing its career on the big screen.

The iconic 1963 Volkswagen Beetle better known as Herbie in five Disney movies was recently sold for $115,116 at a car auction. 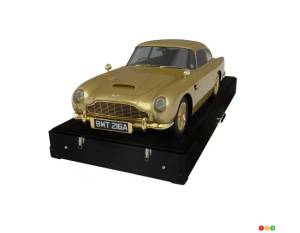 As a way to celebrate the 50th anniversary of Goldfinger, the first James Bond film to feature the now iconic Aston Martin DB5, the creators recently commiss...