Like several other prestige brands before it, Aston Martin has blinked; it is developing a very first utility model. The Aston Martin DBX has been in the works for a while and it’s almost ready for its big reveal. This week the company announced details of the powertrain that will make the SUV go, or at least its initial launch version.

The unit is a 4.0L twin-turbo V8, already found in the company’s Vantage and DB11 V8 versions. This time around it will deliver a total output of 542 hp and 516 lb-ft of torque. This is the most powerful iteration of this engine, which actually comes from Mercedes-AMG.

The DBX is currently in its final phase of testing before it gets the go-ahead for production; that testing has been more involved and thorough than for any other model produced by the company. Because of its configuration, it will have to be capable in different contexts than the brand’s usual sports cars. 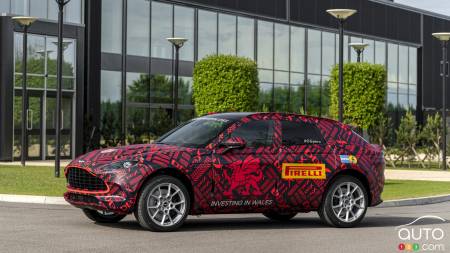 With a knowing eye to its faithful clientele, Aston Martin also tested the DBX SUV on the track. The company is promising a top speed of 180 mph (290 km/h), and claims the DBX can attack corners at the same speed as the Vantage, and be more efficient in braking than the DBS Superleggera.

At the same time, the company knows it has to offer the right level of refinement expected of a modern luxury SUV, but not at the cost of sacrificing the performance its customers expect.

We expect an official presentation of the DBX in December, with in-store arrival sometime in 2020. There will almost surely also be other versions to some, notably one running on Aston Martin’s 5.2L V12 engine.

The SUV is the fourth of seven models promised by Aston Martin to undertake the start of its second century. The first was the DB11, followed by the Vantage and then the DBS Superleggera. Looking forward, the company plans to introduce a central-engine Vanquish in 2021, as well as a Lagonda SUV in 2022. Further on the horizon is a Lagonda sedan, which could be ready for 2023. Aston Martin DBX: A First View of the Interior of the SUV

Aston Martin has shown a first image of the interior of the Aston Martin DBX. The company also announced a starting price of nearly $190,000 USD for its firs...

Aston Martin has, according to reports, registered the name Varekai, likely for use as the name of its very first SUV model. Currently known as the DBX, the ...