Hallowed British automaker Aston Martin sells very high-end vehicles only, and its yearly sales add up roughly to what Toyota sells just of its RAV4 model, every month, in Canada only. Be that as it may, the company has been busying readying its own shift to electric mobility, just like the automotive giants around it.

Aston Martin this week provided some details on the first two battery-powered models it plans to bring to market, with the help and cooperation of its partner Daimler.

Speaking to the Financial Times, company stakeholder Lawrence Stroll confirmed that at least two electric models are in the works. One will be a sports car in the mold of the DB11, the other an SUV. Both will be built in the UK, meaning they won't come off a Mercedes-Benz assembly line.

Two things remain to be finalized, however, the first being the models’ very design. On that front, we can expect to see the brand's signature design intact, but with the freedoms that designing an electric car allows designers, it will be interesting to see what direction Aston Martin goes in. The other unknown has to with nomenclature: Lawrence Stroll said his team hasn't even decided on their names yet. 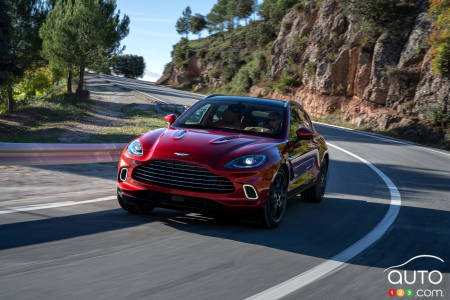 Both vehicles are likely to use at least some of Mercedes-Benz's technology. Daimler will increase its stake in Aston Martin to 20 percent by 2023, and in return, it will give the company access to its hybrid and electric powertrains. It's a win-win situation, as Aston Martin doesn’t have the means invest heavily in the technology and the sharing will allow Mercedes-Benz to achieve economies of scale.

What will be used as a platform and what will be borrowed from Mercedes-Benz? It's still too early to tell. "We’re looking at all options," said Lawrence Stroll.

Aston Martin CEO Tobias Moers confirmed that the plan is for Aston Martin first electric model to launch in 2025 or 2026. By then, the firm will have introduced several hybrid variants, including of the DBX.

Aston Martin needs to go electric because it will not be able to sell cars with combustion engines in its home country of England after 2030. However, the company is not completely abandoning its gasoline-powered models. Lawrence Stroll has already made clear he does not think the combustion engine will ever disappear completely.