One by-product of the powertrains all-electric cars use is relative silence on acceleration. While this is absolutely fine - even pleasant – if you’re at the wheel of a Kia Soul EV, it doesn't deliver the same satisfaction and sensations in the case of a performance car, where much of the emotion delivered is through the sound of the exhaust and the grunt of the engine.

To compensate for this absence, auto manufacturers are using computer-generated sounds. BMW decided line up the talents of renowned film-music composer Hans Zimmer to create sounds for the Vision M concept, a head-turning design study that delivers and astounding 600 hp. Apparently all parties were happy with the results: the collaboration will be extended to production vehicles.

The Oscar-winning composer will create the sound for the i4 sedan and the iX SUV, two electric vehicles that have already been presented by BMW and are expected to hit showrooms in the coming months. To be clear, we’re talking about a sound will be heard by the vehicle's occupants and not by pedestrians.

Many electric models emit artificial sound, but making one worthy of BMW's M brand is a major challenge. Sound is an integral part of the driving experience in a sports car, and replacing it is easier said than done.

Hans Zimmer took an original approach to the challenge. His notion was to give M vehicle drivers “something which is more of an experience than they ever had with their petrol engines, and make it even more exciting and more joyful to drive”. Elaborating further, Renzo Vitale, the creative director of sound at BMW Group, said the goal of the project aim was to translate into sound "the feeling of an explosion related to sound.” In his view, the end result conveys “force, a fusion between strengths, and a fusion energy”.

You can hear the sound Hans Zimmer created at the end of the video included above. While there’s mechanical powertrain sound that’s recognizable, there’s clearly nothing natural about it, and in the end each individual will have to make up their own mind about it.

It’s easy to imagine that in time, designers will be able to create multitudes of sounds and that it will even be possible for drivers to choose from different settings. 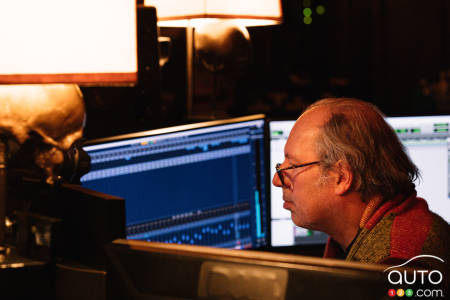