This time last year, on this date in fact, we reported on the presentation of two all-electric vehicle prototypes shown at the Los Angeles Auto Show by the fledgling Bollinger firm: the B1 SUV and the B2 pickup truck.

At that time, we had some information on the pricing and powertrains that would come with the two high-performance models; we also learned over the past year that the company was in favour of offering a chassis-cab version as well. The models now resurface as versions closer to production, along with some more information about the products.

At first glance, apart from the colour (they were black at the LA Show), it's hard to see what’s changed from the concept versions. Both models are still characterized by a very square design inspired by the original Land Rover Defender. 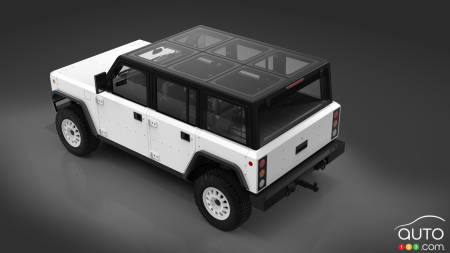 Photo: Bollinger
Bollinger B1, from above

However, there are many minor differences that become apparent when analyzing the images a little more closely, for instance a higher belt line, which increases the volume of the box on the pickup truck. Also, thanks to improvements in the firm's thermal management technology, the vents around the headlights are no longer necessary. In addition, the panel that opens at the front has been widened as its ends join the headlight spaces. The latter have also been replaced by more traditional units.

These are subtle changes, to be sure, but they do prove that the company hasn’t remained idle since the LA show of last November.

Another slight visual change involves a forward shift of the B pillars, which allows for larger rear doors for easier access. The modification slightly reduces the size of the front doors and forced the company to eliminate the sliding windows found in these areas. The presentation is now more traditional and homogenous, though the design remains quite original. 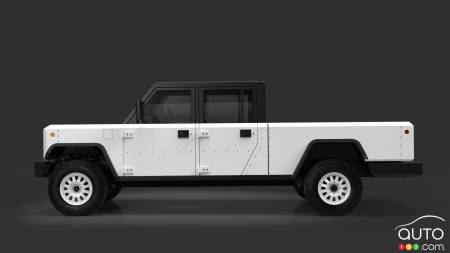 No other changes have been announced for the moment and inside, it seems to be the status quo for the moment. It should be noted that an identical powertrain consisting of two electric motors will serve the models, delivering 614 hp and 688 lb-ft of torque. Bollinger promises a 0-100 km/h acceleration time of under 5 seconds, which is impressive for a vehicle with the aerodynamics of a freezer. Towing capacity is reported at 7,500 pounds.

Both models are powered by a 120-kWh lithium-ion battery that should provide a range of approximately 325-350 km, unless improvements are made by the time the products are officially launched.

Production is scheduled to begin in 2021; expect prices, when confirmed, to remain in the six-figure range. 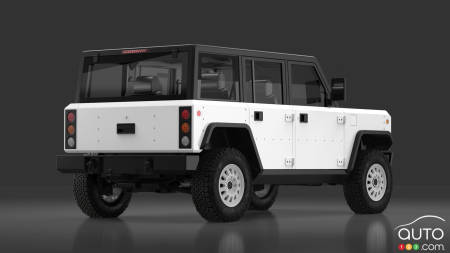 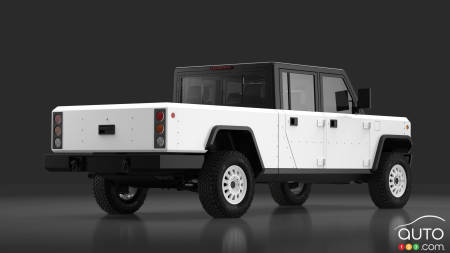 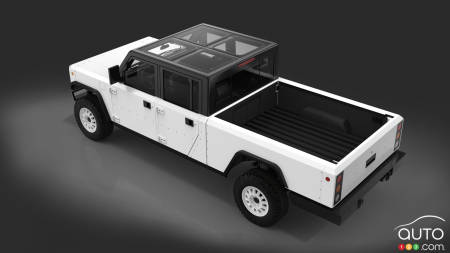 Photo: Bollinger
Bollinger B2, from above 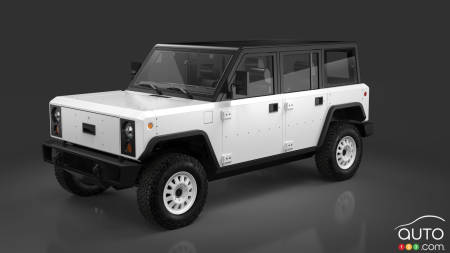 Two all-electric monsters from Bollinger that look like they came straight from a Mecano set are turning heads at the Los Angeles Auto show this week. The Bo...