Cadillac and the United States Tennis Association (USTA) have reached an agreement that will change the face of the US Open. The American luxury brand becomes the official automaker of the US Open, and will remain so for several years to come.

The 2022 edition of the event, which is always held in early September in New York, gets under way in a couple of weeks, and we can expect to see a lot specifically of the new Lyriq EV.

As well, the Cadillac logo will feature on all the courts and nets at the USTA Billie Jean King National Tennis Center in Flushing Meadow, Queens, New York. 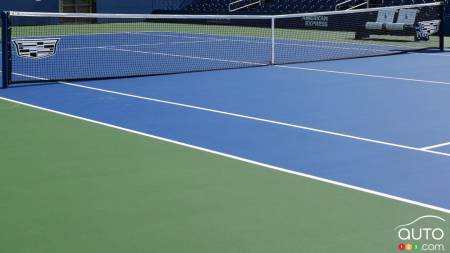 Photo: US Open
Netting at the US Open with Cadillac logos

Cadillac says a 3000 square foot showroom has been planned; it will includes something called the Cadillac ELECTRIQ, there to inform visitors about the company’s present and future electric models and projects.

Of course, Cadillac will also provide vehicles to transport the 250 or so players who will be participating in the tournament to and from the tennis centre. USTA Executive Director of Corporate Partnerships Deanne Pownall said the association is “thrilled” about the sponsorship agreement with Cadillac and believes it will “electrify the fan experience”. Here’s what more she had to say:

“The US Open and Cadillac are a perfect match. Cadillac is an iconic American luxury brand with a commitment to excellence, innovation and equality. The US Open Tennis Championships is the biggest and boldest tennis tournament and will provide Cadillac with a spectacular showcase to demonstrate its bold vision to fans on-site and around the world.”

US Open fan appreciation week begins on August 23, 2022. The actual tournament begins on August 29 and concludes on September 11. If you happen to be in that area, and you own a Cadillac, you can park for free in some of the parking lots adjacent to the US Open Center.

In addition, on Friday, September 2, Cadillac plans to surprise some fans with front-row seat upgrades and more. As well, about 10,000 fans will also receive a Cadillac cap emblazoned with “Be Iconic”. 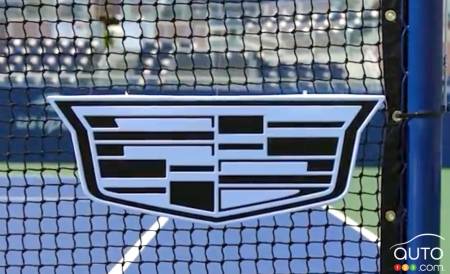 Photo: US Open (Twitter)
The Cadillac logo on a net at the US Open

Horses in Spades for the Dual-Motor, AWD Cadillac Lyriq

Cadillac is promising a total output of 500 hp for the dual-motor, AWD version of the Lyriq electric SUV, which will debut later this year, after the regular...