In most cases, when I receive an invitation to an event as an automotive journalist, it’s either to get some type of technical training, attend the official launch of a new product, or take the wheel of a new vehicle model.

I recently got an invitation to an event of a different sort, in fact it was a first of its kind for me. I was called on, along with a number of other scribes, to “try out” an autonomous driving system. The Super Cruise system, as it’s called, is currently offered in just one model in the Cadillac lineup, the CT6 sedan. Check out our review – and first go-round with Super Cruise – right here.

It may not yet be widespread, but the system will be, and soon. By 2020 it will be incorporated into all Cadillac models, and then other vehicles produced by General Motors banners.

And so it was that I let myself be literally driven by a car. For someone with a lifelong love of taking the commands of just about any motorized four-wheel machine, I can tell you that this goes against my instincts. Duty calls, though, and in the end I had to cede control to the machine… mostly. 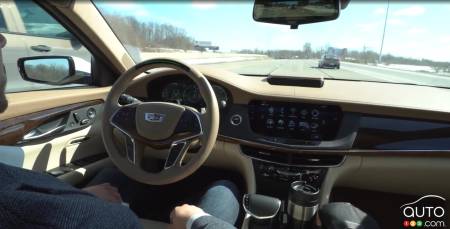 Cadillac has dubbed its technology Super Cruise, but in a nutshell, what it is is a cruise control system with a superior (artificial) intelligence brain.

Concretely, here’s what it does. While a regular adaptive cruise control system is able to keep your vehicle at a safe distance from the one in front of you, Super Cruise does that, but also keeps you centered within your lane. Now I can almost see you lifting your hand (because we’re all so polite here at Auto123.com!) to say that, well, other vehicles offer that feature as well, and you’re perfectly right.

Nissan has its ProPilot Assist, for example, which enables vehicles to stay independently in the centre of their lane. And Mercedes-Benz has developed a similar system that can even do lane changes without getting the driver involved, at least once the turn signal is activated.

The Super Cruise, though, goes quite a bit further than this.

Thanks to a technology known as LiDAR (Light Detection and Ranging), the vehicle can detect what’s ahead in terms of climbs, descents and curves, up to 2.5 km away. Major North American highways are entered in the system’s memory via GPS. The result is that your Cadillac knows the highway you’re driving on better than you do. 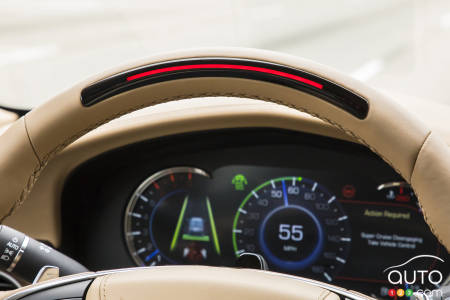 You can activate the Super Cruise mode once you’re on one of those highways. Cameras identify markers on the sides of the road surface and the car takes care of the rest. And another way in which the system differs from those I mentioned above, is that it doesn’t warn you to re-take control of the car after a few seconds. You can drive long distances without touching the steering wheel.

Now, it takes some courage at first to entrust controls to the vehicle. Knowing how the system works exactly, however, does help to overcome those natural jitters.

Using the system is actually quite simple. When Super Cruise is activated, a green band is illuminated on the top part of the steering wheel. If it doesn’t appear, it means it’s not possible to activate the system, for whatever reason. 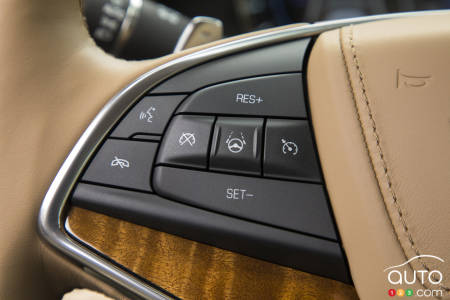 Once it's on, Super Cruise will deactivate itself when it identifies an approaching exit ramp or other changes in the road ahead. And if it doesn’t recognize a section of road you’re entering, it doesn’t try to be a hero. That green band on the steering wheel starts to blink, while maintaining its position in its lane, and emits a vocal command to the driver to retake control. If you don’t, the car activates the hazard lights and applies the brakes until it comes to a complete stop.

This, of course, is the sequence of events that would take place in the event a driver falls asleep at the wheel, for example. During our test of the system, my colleagues and I were able to simulate this scenario. I can tell you that the car quickly intervened. Also, once that voice command has been sent, it’s impossible to reactivate the system without stopping the car and cutting the engine.

The actual functioning of the system is impressive, there’s no doubt about that. But it is, for now, restricted to divided highways. It can’t be used in the city, on country roads or on roads with two-way traffic.

Also, you may not be able to use the system even on divided highways if the required markings are not there on the road surface.

When approaching a construction zone, the vehicle stays in its lane, but it’s not all that reassuring, as it tends to cut things pretty close to those orange cones.

In heavy traffic, Super Cruise works like a charm, as the car accelerates and slows down as effectively if not more so than you could.

During our test drive, we did not witness any examples of the Super Cruise screwing up. In fact, it offers a drive that’s more even and stable than most human drivers can muster. On the other hand, when Mother Nature tosses heavy winds into the mix, as she did when we were on our way back to our starting point along highway 20 east of Quebec City, the system was required to make frequent corrections, and the drive was less linear. 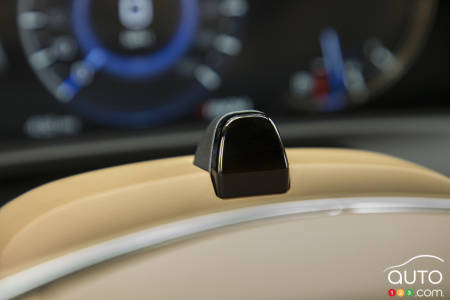 Super Cruise can be activated and function at a speed of up to 85 mph, or 138 km/h. Given that this is far above the maximum speed limit allowed on Quebec highways, it is correct to say that Super Cruise can be used at all times… at least in principle.

Like it or not, self-driving cars are going to become a reality. Will they operate everywhere and at all times? Probably not. In the foreseeable future, specific areas like divided highways will be the focus.

The last and ultimately most relevant question is, will consumers accept it? In my case, the work I do means that I’m called on to try out and evaluate these technologies, and this is what I’ve shared with you here. But in my everyday life, it’s not all that big a concern or priority for me; I can’t see myself using it very much. On the other hand, those who regularly drive long highway stretches, between Montreal and Quebec City or between Toronto and Ottawa for example, might quickly come to appreciate this type of drive assist system, especially at those times when sleepiness hits.

I know that if I’m on a long road trip and start to feel my eyelids getting heavy, I might be pretty happy to have an intelligent system like Super Cruise there to help me out.

Of course, the system, like any technology, depends on people using it wisely. And this is where things could get problematic. Just think about how many drivers did and continue to use mobile phones while driving…

Auto manufacturers have a role to play when it comes to this issue, by incorporating restrictive elements in their autonomous driving systems. Super Cruise, for example, actually notices when the driver takes his or her eyes off the road for any length of time and will send a warning. 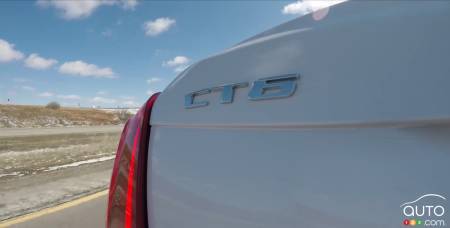 Hopefully consumers will, over time, evaluate the systems presented by the automakers and determine how best to integrate them in their daily driving habits.

Then it will certainly have been worth the effort – and the cost – to develop these technologies, because there is no doubt that autonomous driving systems will reduce the number of road accidents.

For that reason alone, it’s hard to come out against them.

Cadillac’s Super Cruise Technology will Migrate to Other ...

GM will expand use of Cadillac’s Super Cruise autonomous driving system to other models made by the luxury brand, but also the range of vehicles produced by ...