Las Vegas, NV - Lithium-ion batteries dominate the market and will continue to do so for a few more years, according to Daimler senior manager Andreas Hintennach, who spoke with Auto123 this week at the Consumer Electronics Show in Las Vegas. "It’s still possible to improve the autonomy by 20% with the present technology of lithium-ion batteries by improving the chemical composition", says Hintennach, doctor in electrochemistry who has been working to improve the performances and the efficiency of the batteries at Mercedes-Benz since 2011.

He believes companies need to work on energy density and faster recharging to take advantage of current technology. He does point out, however, that there is a need to improve methods of extracting minerals such as lithium, which currently needs to be of very high purity for use in batteries. 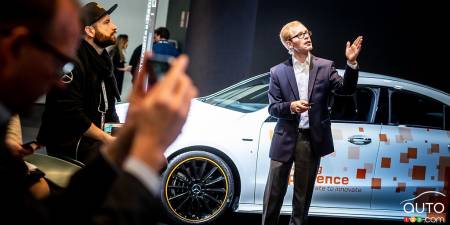 Many manufacturers are working to adapt batteries that can accept lithium with 0.5% less purity, reducing the amount of water used by 80%. The same methods must be applied for cobalt and nickel, which are the other components of the current battery stack.

Switching to sulfur
In the not-too-distant future, sulfur will be the way to go; this solution is highly recyclable (85%), saves 50% in terms of weight and costs 40% less than components such as nickel and cobalt.

While more environmentally friendly, sulfur does represent a fundamental change in battery chemistry that requires years of research, which explains its absence on the market at the moment. It will take a few more years to see the first automotive applications.

Also to keep in mind: Without the presence of nickel and cobalt, recharging will be a little slower, but the range will be greater. Replacing lithium with magnesium
Contrary to popular belief, there is no shortage of lithium around us, but it will be crucial to refine the extraction methods and make sure that all of the battery material on the market is recyclable.

At the moment 95% of the components of lithium-ion batteries are recyclable, but as we approach the technological limits of this type of battery, it’s important to cast an eye on the future, and magnesium and solid-state batteries are interesting potential longer-term solutions. Both are currently under study.

Researchers know that magnesium has proven itself and gives batteries more efficiency and stability. The catch is that there are few known electrolytic materials compatible with magnesium. This means roughly that it is difficult to migrate electrons from anodes to cathodes. Research is underway, but according to Andreas Hintennach, it will take another 15 years before we see significant developments in this area. Great potential in solid batteries
One technology that is ready for commercialization in certain sectors such as electronics is the solid electrolyte battery. Here in Canada, Hydro-Québec is one of the most advanced companies in the development of this technology and holds several patents with the aim of marketing a solid battery for electric vehicles.

According to Andreas Hintennach, we won’t see commercially available solid-state batteries for a few years yet, with much testing and research still to be done. The systems include a solid-solid interphase between electroactive materials and the electrolyte, and the chemical mechanisms are significantly different in solid chemistry than in solid-organic interphase chemistry. These materials react differently depending on the climate. Understanding these mechanisms is essential to further improve the life, efficiency, and therefore the durability of any type of energy storage and conversion, but in particular for batteries.

Organic batteries
If we turn our gaze even further into the future, most will agree there’s a holy grail out there: the organic battery. This technology (already under study) will not get practical applications in the automotive sector in the near-future, says Andreas Hintennach. It will be about 25 years before we see that. 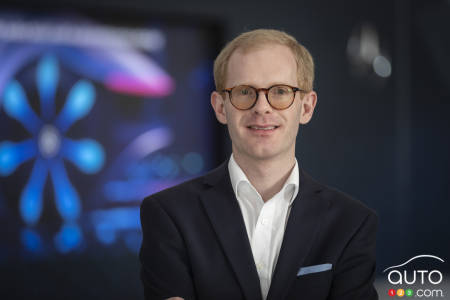 Still, there’s much to get excited about here. This revolutionary technology is based on the chemistry of graphene-based organic cells and sea salts, which are the residues of water desalination, and thus completely eliminates the need to use rare earths and toxic and expensive components such as metals. Electromobility thus becomes independent of fossil resources. Dwell on that thought for a moment…

Then there’s the notion of recycling materials by composting – and the materials used will be 100% recyclable. Graphene, which will soon be used in smartphones, is already being studied for use in electric vehicles. This material, a million times thinner than a sheet of paper, is known for its high electrical conductivity. The electrons move within them up to 150 times faster than in silicon, so this will reduce charging time.

A graphene battery with a range of 700 km, like the one in the Mercedes Benz Vision AVTR, can theoretically fully recharge in 10 minutes on a fast recharge. 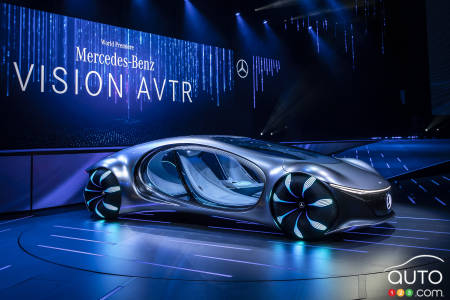 Graphene does not change the traditional functioning of a battery, which rests on an electric accumulator with two electrodes: one negative (anode) and the other positive (the cathode). The ion flow always goes through an electrolyte solution in one direction or the other depending on whether the battery is charged or discharged.

The main difference between graphene-based batteries and a lithium-ion battery is the composition of the two electrodes. In a graphene battery, the electrodes are made of recyclable and compostable material. The use of metals and rare earths is eliminated here. Once the battery reaches the end of its life, it is compostable, so the ecological footprint is zero.

Here’s possibly the most remarkable thing about the remarkable era we’re living in today in the automotive domain: as exciting as the times are now, they promise to be even more spectacular in 10 and 20 years’ time. 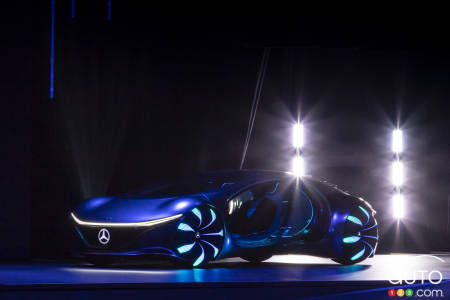