Las Vegas, NV - Mercedes CEO Ola Källenius is a movie fan and it was this passion that helped the German automaker create a vision for the future. The Mercedes-Benz VISION AVTR unveiled today at CES (Consumer Electronics Show) is not a concept car that will be on our roads in the next 10 years, but a study that takes us decades into the future.

Mercedes-Benz VISION AVTR
Many car manufacturers currently talk about the human-machine interface (HMI). Mercedes-Benz takes the concept further here by creating HMM (Human Machine Merge), or a fusion between car and human - just like in the film Avatar where the actors are in symbiosis with the nature which surrounds them. 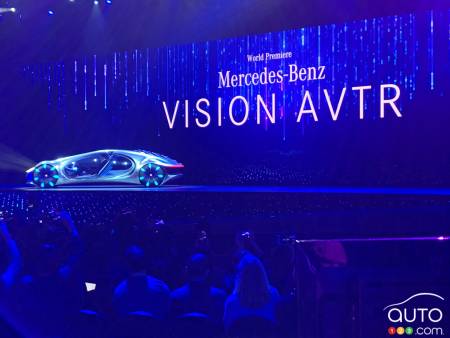 This vehicle will even be able to feel your heartbeat when you climb aboard, on the same principle as the rider who takes a lock of hair and becomes one with his Banshii in Avatar.

A team concept
The designers of the movie Avatar not only lent their name to this vehicle, but brought a lot of ideas that ended up in the concept. For example, the wheels that look more like balloons that allow the vehicle to move in parallel are an idea of the producer of the film Avatar Jon Landau who found that ordinary tires did not correspond to this organic approach. This way, the car moves in all directions like a living being.

The small openings in the back which form as many small spoilers which contributes to better aerodynamics are also a kind of cartilage like certain animals in Avatar and by opening and closing, they give the impression that the car is breathing, that it’s alive. 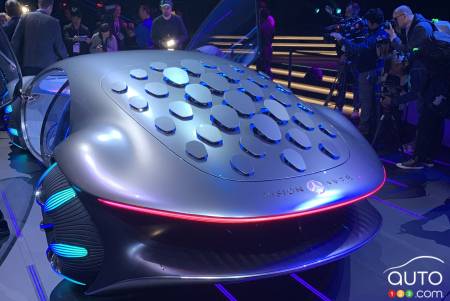 This creation, which the folks at Mercedes-Benz are even hesitant to call a car, is the result of a close partnership between the entertainment and automobile industries. In fact, it’s an unusual collaboration, in that while many cars have in the past been designed for the purpose of being promoted within Hollywood productions, in this case, the opposite happened. Here we have a movie production company that got involved in an automotive product.

You will not see the VISION AVTR in the next production of Avatar if there is one, let’s be clear, but you get a sense of what a car can look like when it’s in symbiosis with its environment.

A minimalist interior
The distinctive design structure of the exterior was inspired by… a pretzel. As acknowledged by the Mercedes design team, it was ultimately the intertwined form of a pretzel that served as the basis for the exterior shape, while the One Bow, a type of infinite loop in which the back of the seat rises forward and serves as a headrest, was the inspiration for the interior. 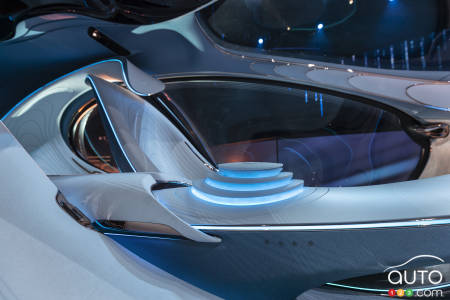 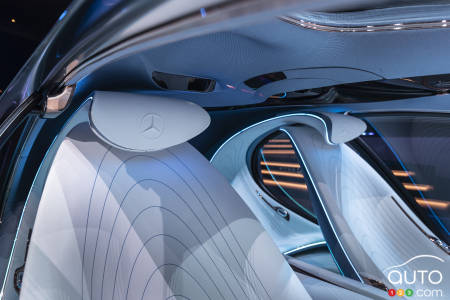 Just as in Avatar the rider is one with his Banshii, the driver here is one with the machine via a biometric connection that is the multifunctional control element in the center console allowing human and machine to merge. When the user places their hand on the control unit, the interior comes to life and the vehicle recognizes them by their heartbeat (via vibrates in the seat) and breathing. This command is also used to control the speed and direction of movement; the system uses uses autonomous drive technology via the integrated mapping.

No more commands, only intuitive instructions
It gets even more mind-blowing. Raise your hand, and a selection of menus is projected in the palm of your hand, through which the passenger can intuitively choose between different functions. For example, real-time 3D graphics can be used to explore the fictional world of Pandora from different perspectives. The curved display module creates the visual connection between passengers and the outside world. 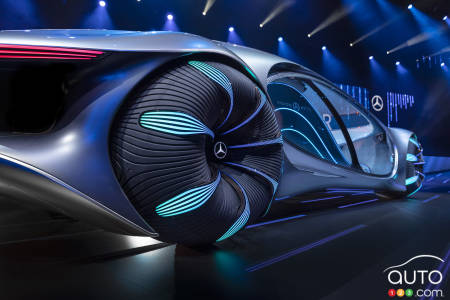 Sustainability and dynamism
To be in harmony with the environment, waste is excluded; Vision AVTR will offer organic graphene-based batteries that are completely free of rare earths and metals. The battery materials, based on seawater, are compostable and therefore fully recyclable.

Know that this type of battery is not science-fiction. Researchers are already working on the idea even if realistically we won’t be seeing this technology in use for another 20 to 25 years, and it will result in mobility completely free from using fossil fuels. Mercedes-Benz is thus highlighting the importance of a future self-sufficient economy in the raw-materials sector.

The impression of life
The 33 "bionic flaps" at the rear of the vehicle are reminiscent of the scales of reptiles. These can communicate with the driver and through the driver with the outside world through fluid and natural movements and subtle gestures. 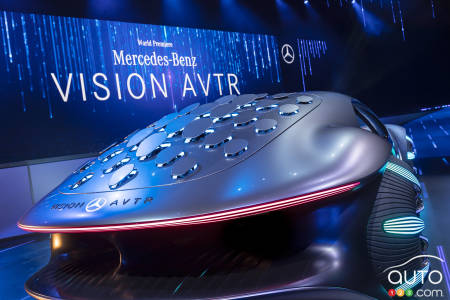 Because it will be possible to steer the front and rear wheels either in the same or opposite direction, the VISION AVTR can move sideways by approximately 30 degrees, unlike conventional vehicles.

The seats of the VISION AVTR are decked in DINAMICA vegan leather already used in AMG models, while the floor is decorated with an innovative wood called Karuun. Karuun's raw material is rattan, which grows very quickly as a natural raw material and is harvested by hand in Indonesia. The material provides interior warmth and radiates naturalness.

This type of vehicle, which will be both autonomous – there’s not even a steering wheel - and electric, is seen to represent the final result of a technology that will have become so advanced as to make life simple again for people, who will be able to be as one with their environment, intuitively. 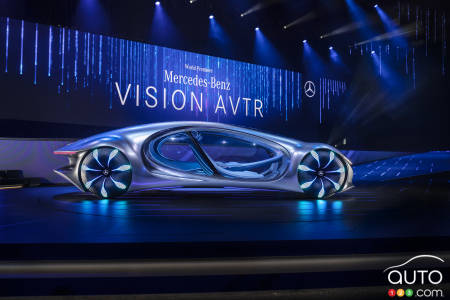 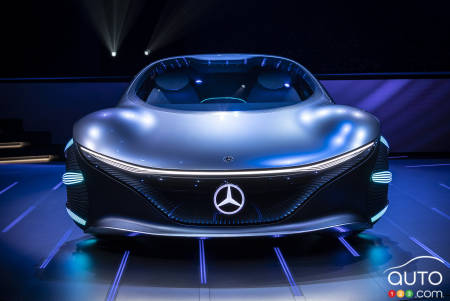 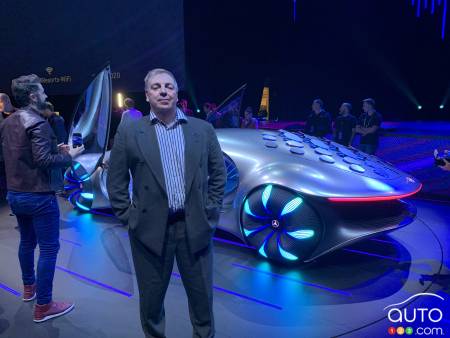 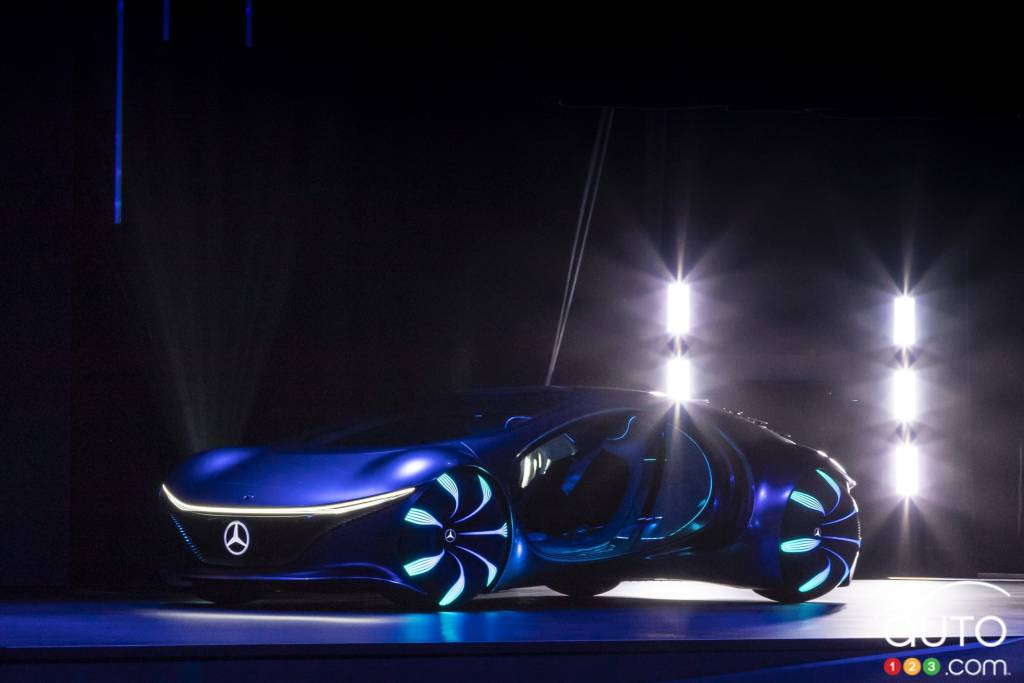 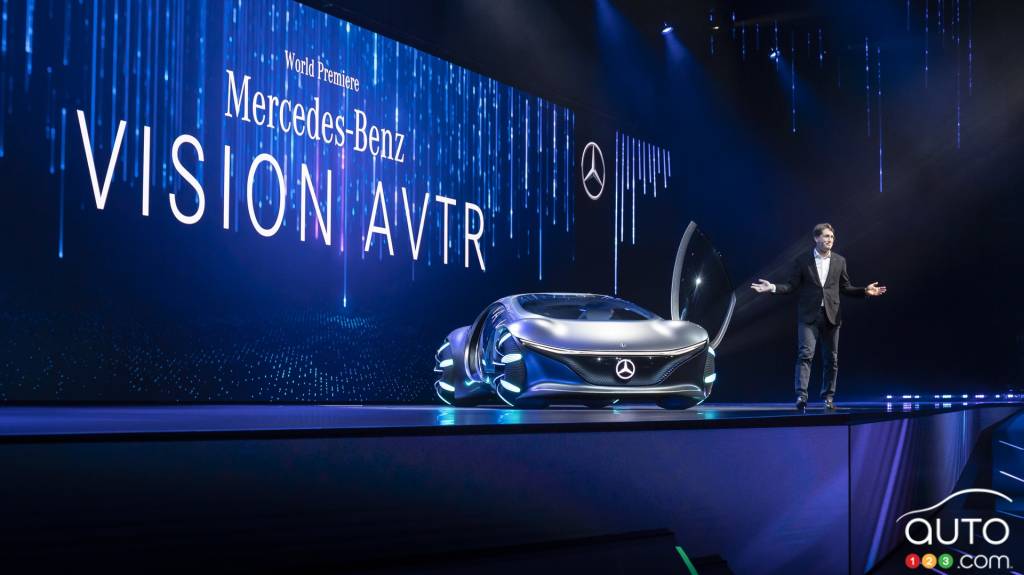 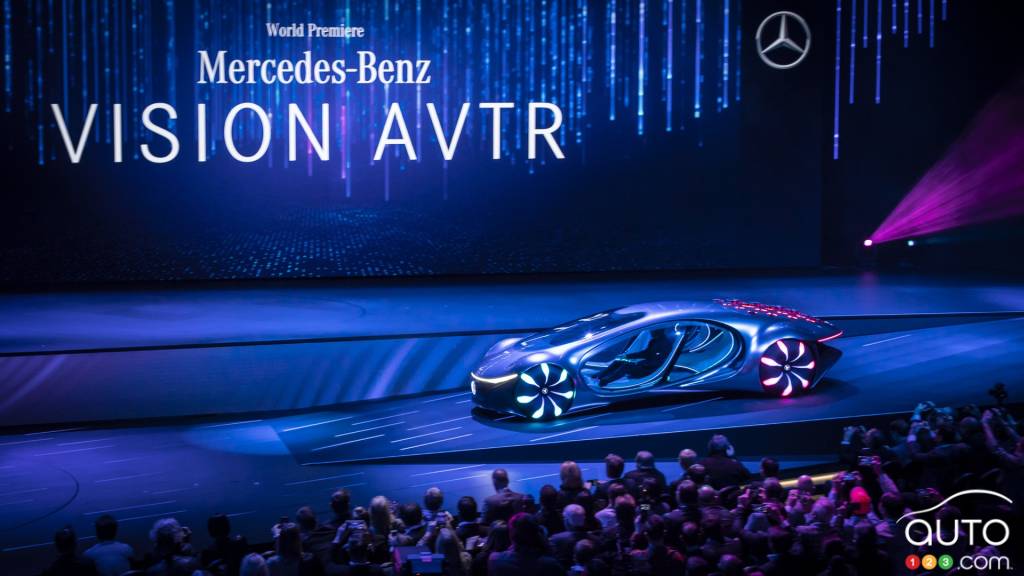