It’s common for manufacturers to survey their clientele and sound out specifically targeted consumer groups to gauge interest for future models, or for changes that might be brought to existing ones.

Generally, this doesn’t make news – first of all because often it’s simply not newsworthy, and secondly because the surveying is done discretely and doesn’t make it to us.

In this case, however, it’s the exact opposite.

On an online forum dedicated to all things Camaro, someone posted a screen capture showing a questionnaire that Chevrolet had sent out to fans of the model. The intention was clear: to find out the level of interest in and enthusiasm for hybrid versions of the Camaro.

Now, this might not be worth a lot of fuss and bother and if we didn’t already know that Ford is going this route with its iconic Mustang. Chevrolet simply can’t allow itself to be one-upped by its big rival. 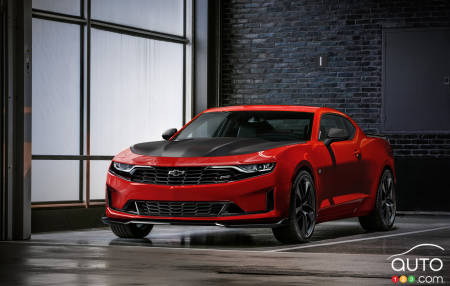 Among the possibilities advanced by Chevrolet, the questionnaire mentions a hybrid configuration centered on a 4-cylinder turbo, but also the possibility of a combustion engine-battery pack combo wherein the former is a V8. The 2.7L 4-cylinder making itss debut in the Chevrolet Silverado was another possibility presented to those being surveyed.

In the first two of those scenarios, we’re talking about powertrains that would enable boosting the performance level of the car, but also increased consumption.  In the case of a hybrid system with a 4-cylinder, the output would be around 365 hp, and 0-100 km/h acceleration time of 4.4 seconds.

In the first case posited to survey respondents, the system would entail an additional cost of $4,000, while in the second case it would mean a boost in price of $8,000.

Inserting the Silverado-destined 4-cylinder, meanwhile, would result in no cost increase for the Camaro.

There’s little doubt from this document that Chevrolet understands that, just like its big rival Ford, it will have little choice but to depart from some of its longstanding traditions and venture into new territory.

As a mental exercise, go back in time 10 years, or even five, and tell people that hybrid Mustangs and Camaros are on the way in the near-future; try to imagine their response…

An Electric Chevrolet Camaro: The Logical Next Step?

GM recently released some details about their electrification plan and a short video the automaker posted on Twitter that has been the subject, of much chatt...

Mustang Hybrid One of 13 Electric Models Planned by Ford ...

Ford had confirmed a year ago that it would be producing a hybrid version of its iconic Mustang; now it is indicating that an electrified Mustang is on track...