You may recall a little bit of news we covered last year, when the owner of a brand-new next-generation Chevrolet Corvette C8 model had his prized possession destroyed when it fell off the lift it had been hoisted up on in a dealer's service centre.

The news ping-ponged around the internet at lightning speed, unsurprisingly. Chevrolet eventually stepped in to resolve the situation with the customer (as in, replaced the car with a new one), but suffice to say it was quite an embarrassing moment for the dealership.

Incredibly, the same cock-up has just happened again, and now there’s another C8 owner who received some bad news from a service centre with egg on its face. For the moment, there are few details to share regarding the latest incident, other than the images that show plainly enough the significant damage to the car.

The images are courtesy a member of an online Corvette forum, who posted photos of the blue Corvette partially suspended from a two-post elevator at a service centre. They did not provide an explanation for the images, saying only that they were sent to them by a family member.

It's unclear whether this mishap occurred at a Chevrolet dealership or a independent garage. The former would be kind of surprising, considering the ruckus raised by last year’s incident and the fact that General Motors provides extensive training on the C8 Corvette and how to maintain it (including how to properly install it on the elevator). Though of course, a mistake is always a possibility, even with training.

The diagram you see here is the one shown to technicians during training for C8 maintenance. It shows the points at which the model should be hoisted, as well as the areas where employees should NOT attempt to lift the model.

One thing’s for sure: with at least two such incidents to date, there are C8 owners who might start to get nervous about entrusting their vehicle to a service centre. 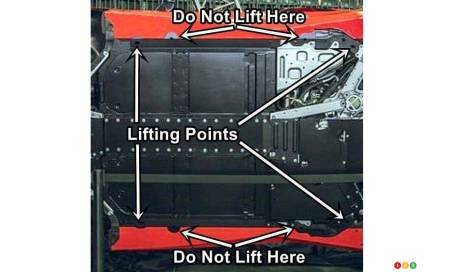 For us, it was as much as anything an exciting, apt way to bid adieu to the long sunny days of summer 2021. Here is our review of the 2021 Chevrolet Corvette...