We reported a few days ago on the launch of Chevrolet’s all-electric SUV. We now get more images of and fuller details on the 2020 Chevrolet Menlo, a compact model based on the Bolt model that is well-known to us here in North America.

The Menlo is the company’s first electric vehicle to be offered on the Chinese market. It will feature a range of around 315 km, taking into account the different ways range is calculated in various jurisdictions.

Esthetically, the Menlo’s design is inspired in good part by the FNR-X concept. In comparison with the Bolt this is a model the lines of which are much more sharply defined. 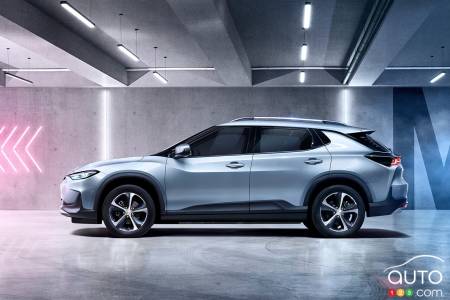 We admit to being perplexed why General Motors appears to have decided it won’t being the model to the North American market. At first glance the Menlo looks to us like it has a better chance of succeeding here than the Chevy Bolt EV. It’s a more attractive vehicle, and even more importantly, it’s more spacious.

Chevrolet has instead chosen to build a new electric vehicle for our market at its plant in Orion, Michigan, one that would sit on an improved version of the Bolt’s platform. We expect that it, like the Menlo, would take the form of a compact SUV.

Why not just go with the Menlo, you might ask yourselves? We did. One possible answer is that it appears that GM is not all that intent on selling a lot of EVs in North America. Recall that just a few months ago, the company’s boss Mary Barra said that it would take several years still before the brand’s electric vehicles are profitable in North America.

In other words, if the Chevrolet Bolt sells only minimally, no one at GM is going to complain much about it. The same reality afflicted the Fiat 500 electric version. As it was losing $14,000 CAD in every transaction, the company did not want buyers to choose the model – and said so.

In China, government regulations are more favourable to the sale of electric vehicles. In fact, the  same model that’s a money-loser in North America could potentially be profitable on the Chinese market.

We suspect this calculus is in play for the Menlo. For our part, we’re left to hope that the EV Chevrolet eventually produces for our market will feature as positive a design as this one.

Chevrolet has just presented its Menlo in China; it’s the first electric vehicle introduced by the brand for that market. The model is based on the Buick Vel...