The Chevrolet Silverado comes in multiple different formats, including two designed to be more capable when venturing off beaten paths, the Trail Boss and Z71 editions. In the case of the former, it takes the Z71 version and adds monotube shocks, off-road wheels and tires and a package that boosts ground clearance.

But according to a report by specialized website Muscle Cars & Trucks, the company is looking to things a step or two further with a truly extreme off-road-specialized Silverado pickup.

General Motors recently applied for a patent on the ZRX name, and it appears this is what the company has in mind for the moniker. The new version would feature elements now found on the ZR2 edition of the Chevrolet Colorado, for example Multimatic DSSV (Dynamic Spool Suspension Valve) shocks, which feature a special valve in a separate chamber called a cylindrical slide valve. This allows for setting the firmness of the shock depending on the road conditions encountered. The adjustment can be made during movement of the shock for optimal performance at all times.

Among the other improvements on tap for this Silverado ZRX, locking front and rear differentials and bigger approach and departure angles.

There are no mechanical changes planned for the new off-roader, which means Chevrolet does not have in mind a direct competitor of Ford F-150 Raptor. Rather, the ZRX would compete with the Ram 1500 Rebel and Ram 2500 Power Wagon. Still, with a 6.2L V8 delivering 420 hp and 510 lb-ft of torque under the hood, that leaves a lot leeway for crazy manoeuvres far from the paved road.

The report also indicates the off-road-focused Silverado will make its debut in 2022. 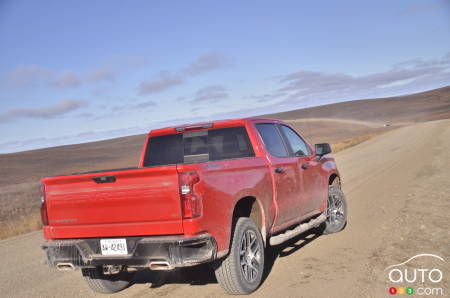