In a decision that surprised exactly no one, Daimler has announced it is pulling the plug on its last Smart car still sold in North America. Ironically, the demise of the Smart EQ Fortwo comes just at the moment when demand in Canada could have received a boost in demand with the implementation of the federal government’s iZEV program.

Of course, the U.S. market is still the force that drives decision-making in the automotive industry. And in the case of Smart it was a no-brainer of a move for Daimler. In a market with eyes only (or almost) for pickups and SUVs, trying to sell a tiny, all-electric car was akin to spitting into the wind.

In 2017, the company had eliminated the gas-powered version of the car to focus on the electric edition.

"After much careful consideration, smart will discontinue its battery-electric smart EQ fortwo model in the US and Canadian markets at the conclusion of MY2019. A number of factors, including a declining micro-car market in the US and Canada, combined with high homologation costs for a low volume model are central to this decision." 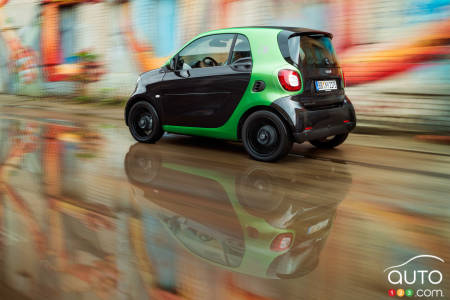 The automaker will continue to sell the vehicle through the end of this year. Maintenance for those and for existing models will be possible at Mercedes-Benz dealerships.

The move does not mean Mercedes-Benz is abandoning its electrification initiative; on the contrary it continues to focus strongly on its EQ line of EVs. The EQC SUV is expected at dealerships at some point in 2020.

In Canada, it will be interesting to see whether the decision to eliminate Smart from the North American market will be offset by increased demand due to the new federal EV incentives program. Will there be a run on remaining stocks of the Smart EQ Fortwo, or will they collect dust at dealerships?

The protests at the Ambassador Bridge connecting Canada and the United States are having an effect on auto production. Toyota, Ford and General Motors have a...

Production of Mazda CX-50 Kicks off at New Toyota-Mazda P...

The new Mazda Toyota Manufacturing plant in Alabama starts production of the Mazda CX-50, an off-road-focused SUV designed for the North American market. It ...