General Motors has announced that the first GMC Hummer EVs will be delivered in December – to U.S. customers. Confirmation came via the head of the GMC division, Duncan Aldred.

Remember that in Canada, we'll have to be more patient, because the first version of the electric pickup, called Hummer Edition 1, is reserved for the American market. This is the top-of-the-line version of the model, which requires an outlay of about $100,000 USD.

During the announcement, GMC also confirmed that the range of this first model is 329 miles (529.47 km). GM had initially announced 350 miles (563 km), though in truth that will certainly be achievable with the next versions, which will be less expensive and have greater capacities.

Speaking of capacities, this first model will be able to tow up to 7500 lb and carry 1300 lb or less. Again, more is expected from subsequent versions.

More than 80 percent of the reservations received so far for the Hummer are for the Edition 1. According to Aldred, some 125,000 people have expressed interest in a Hummer, nearly half of them with interest enough to fork over a $100 deposit to reserve one. GM says everything planned in terms of production for this first year is sold out. The Hummer EV enter a small but growing segment. There’s the Rivian R1T, Ford's F-150 Lightning will launch in 2022, and there more to come, including from Chevrolet. Tesla is working on building a billion-dollar factory in Austin, Texas, where the Cybertruck will be assembled. Although in its case, the date for the model's arrival remains unconfirmed.

The Hummer EV made headlines last week when U.S. President Joe Biden got behind the wheel during a tour of GM's Factory Zero assembly plant in Michigan.

General Motors' next electric vehicle will be the Cadillac Lyriq SUV in 2022. Before then, electric versions of the Chevrolet Silverado and GMC Sierra will be unveiled on January 5. The SUV version of the Hummer will follow in 2023. Aldred expects this version will ultimately account for the majority of the new Hummer's sales. 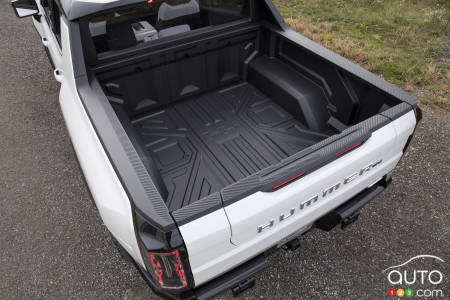 GMC unveiled the highly touted new 2022 GMC Hummer all-electric pickup tonight during Game One of the World Series. Here are the first images of the truck.

With several world premieres and unveilings, the Detroit Auto Show gave us the opportunity to take a look at the the GMC Sierra All Terrain HD Concept.