When it comes to new technologies, the state of California has a tradition of showing the way to the rest of North America, and it’s always interesting to see what is being worked on in that state; what they’re testing today could be upon us tomorrow.

One of the latest new innovations getting some real attention is the digital licence plate. The technology, which is the same as that used for digital books, is in fact currently being tested in the state as part of a pilot project. The screens display the licence plate number, of course, but can display any number of other types of messages.

If your vehicle is stolen, for example, you could have the message changed to indicate that the vehicle is stolen, making it pretty easy to spot. An Amber or weather alert could be displayed on your plate and all those around you when the need arises. The possibilities are virtually limitless.

Your future licence plate could also show that you have the right to park in spots for people with reduced mobility, show your parking permit for a certain neighborhood, or indicate your right to park in certain space.

The pilot project is being introduced first in Sacramento, California, where municipal vehicles will br equipped with the new plates. The company that makes them, Reviver Auto, is also looking at the possibility of starting pilot projects elsewhere in the U.S., with the goal of finading new applications for the system and studying the benefits that its use could bring. Of course, it’s hard not to imagine that it won’t take long before advertisers clamour for access to these miniature billboards, placed potentially on every single car on the road. A video produced by Revivor Auto even alludes to the possibility of placing targeted ads on its digital plates:

Once the DMV (Department of Motor Vehicles) has approved the new equipment, consumers will be able to buy the new plates for $699, and then pay a $7 monthly fee.

Like all nascent technologies inevitably do, the use of this technology brings with it a lot of answered questions. For example, how fragile are the digital plates? Rocks and debris could easily damage the front screens (California vehicles always display two plates). And in northern climates, what will the realities of winter driving conditions (ie. snow, ice and salt) do to the technology?

If a vehicle is involved in a collision, has any thought been given to what will be involved in replacing them, and the cost that entails? Insurers might choose to adjust their insurance rates accordingly.

We’ll have to see what Reviver Auto’s testing brings in terms of new discoveries.

There’s no doubt the technology is intriguing – but is it relevant or viable in all regions? Let us know what you think! 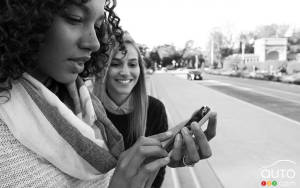 UberX debuts in Toronto, gets banned in California

The UberX ride-sharing service made its debut in Toronto on September 8th after launching in other Canadian cities including Montreal.

People in San Francisco can now use a controversial app called MonkeyParking, which allows them to "sell" their parking spots for $5 or more.

The next big thing from Lexus is not a car

TORRANCE, Calif. -- Lexus' latest innovation in its pursuit of perfection isn't a new vehicle. It's an idea... the idea that a car that will never have an ac...