As you’re no doubt aware, the race issue has come to the fore – again - in the United States and beyond in the aftermath of the murder of George Floyd by a Minnesota police officer. There is a wave of change causing upheaval in American society (and elsewhere), or so we hope.

One of these changes concerns the presence of the Confederate flag in everyday life, especially in the southern states. It represented the states that were in favour of slavery during the American Civil War. The symbol, which was still in use in some jurisdictions, is now being removed from the public arena.

The flag of the confederacy is clearly more than just a piece of history; it’s a symbol of oppression and is understood by many to be a sign with racist connotations, of that there’s little doubt.

Recently NASCAR officially banned the symbol from its races. The state of Mississippi is in the process of removing it from its official flag. It should have been done decades ago, but better late than never.

In the automotive field, that leaves us with a thorny issue, at least for some. Indeed, what should be done with the Confederate flag resting on the roof of the car known as General Lee? The older among you will recall that this second-generation Dodge Charger was the star of the television series The Dukes of Hazzard. 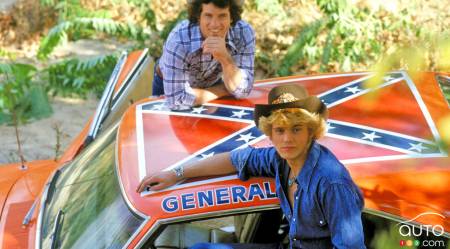 Photo: YouTube
The stars of The Dukes of Hazzard

Should the TV show no longer be broadcast? Does it get an exemption, because it’s part of the televised historical record? What about all the promotional items related to it, on which the flag is prominently displayed?

Each of these questions so easily lends itself to bias on the part of one camp or another. It is not a simple debate, and yes it’s polarizing. But there should be little argument over the fact that, in 2020, the Confederate flag no longer has its place. In fact, it never had its place. At the same time, history cannot be rewritten, and many argue it should even be used to help us all learn, collectively.

The General Lee car (named after General Robert E. Lee of the Confederate army) was embroiled in a first big controversy in 2015. Following the mass murder of nine churchgoers in Charleston, South Carolina by a white man whose car was marked with the Confederate symbol, TV Land decided to pull Dukes of Hazzard reruns off the air. Warner Bros. ceased distribution of the miniature replicas of General Lee. Many stores and chains also stopped selling related items.

Now, recent events have brought the case of the car back to the forefront. On his YouTube channel, John Schneider, one of the stars of the series (broadcast from 1979 to 1985), posted a video asking people to comment on the issue. The answers are very enlightening and we invite you to take a look at it to get your own idea.

What emerges is that the speakers, of all backgrounds, generally have only good memories of what was at the time a family TV show. One African-American collector even explains that he owned a General Lee model, because he admired the series when he was young.

This brings us back to our original question: what do you do with the Confederate flag on the car?

Because it’s a work that represented a reality of the time, and since the aim of the series was not to glorify racism, I’d argue that it should continue to be broadcast. As I mentioned, history can’t be rewritten. Broadcasts could, however, be accompanied by a disclaimer in order to educate new generations of viewers who may be unaware of the meaning of the symbol. This is what HBO Max has done in bringing back to air Gone with the Wind.

As for those Dukes of Hazzards collectibles out there, the question is more delicate. Does the removal of the flag change anything as to their value? Is a person who buys a miniature car with the flag on it racist? Probably not, at least in the vast majority of cases. On the other hand, keep in mind that it wasn’t so many years ago that it was still considered acceptable for antique shops to sell old memorabilia connected to Nazism. Attitudes have clearly evolved over time. 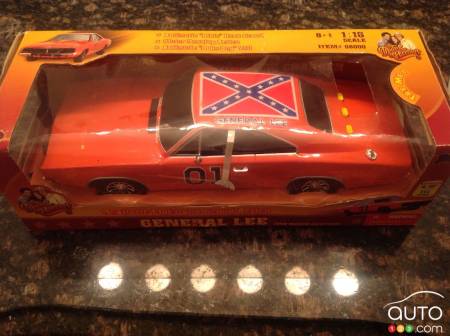 And what about collectors who own a life-size replica of the model? Do they have to take the flag off the roof?

Personally, I would take this last avenue, simply to show my support for the black community, and also because I would be pretty uncomfortable parading around with a Confederate flag, even if its intent in this case is to evoke the relatively innocent television series. In the end, there’s no justification for the contemporary use of a hate symbol.

Back to the example of the Nazis: do you see a lot of swastikas in the public space today?

I end with a reference to the film version the Dukes of Hazzard, made in 2005. In one scene of that movie, a group of African-Americans point at the flag on the car and ask the Duke brothers who’s responsible for its presence. This is the kind of scene that could be used to educate. Without contextualization, the scene is incomprehensible to many viewers.

A New Security Mode for the Dodge Charger and Challenger

Dodge has developed a new security mode for Charger and Challenger models to protect them from theft. It will limit the power of the 6.4L and 6.2L V8 version...