Add Lincoln to the growing list of brands picking up the pace with their electrification plans. Ford's luxury brand announced this week that it plans to make its entire lineup all-electric by 2030. The first part of the plan involves a new SUV that should debut next year.

This isn't the first time we've heard about an electric SUV from Lincoln. There was even talk at one point of the automaker developing a model in partnership with Rivian. Now, the plan is for Lincoln to produce that vehicle on its own, and that it will get styling inspired by the Zephyr Reflection concept. The new model will carry the brand's new design signature.

The SUV would be the same size as the current Aviator, but get distinctive elements to separate its gas-powered cousin. Lincoln teased a first image showing LED lighting that stretches across the width of the front to connect the headlights. Another image shows the interior’s large digital display spanning the entire dashboard. A sketch shows the interior’s flat floor, leading us to think the model will feature an open, spacious environment. 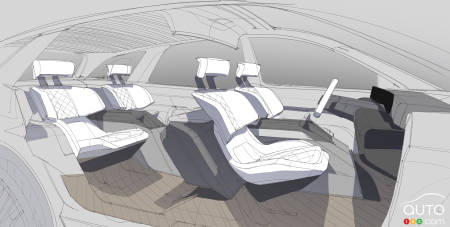 The new Lincoln SUV will be based on a new electric-vehicle architecture that can be adapted to offer front-, rear- or all-wheel drive. The company hasn't released details regarding power or range, but we expect Lincoln's first electric SUV to deliver between 450 and 600 km of range and enough power to compete with other luxury utility models like the Audi e-tron, Jaguar I-Pace and Tesla Model X.

We'll also see new technologies introduced with Lincoln's coming new EVs. One of these will create ongoing relationships with customers by providing more connected experiences through the Lincoln Intelligence System, a cloud-based platform that aims to integrate electrical, energy-distribution and computer systems into highly connected vehicles. For example, online updates will keep models current over time.

We'll definitely have more to share with you about Lincoln's plans as we expect regular announcements, updates and teasers from the company. The new electric vehicle concept Lincoln teased today may be more of a design study than a future production model, but it will at the least reveal where the...