Plagiarism in the automotive industry is nothing new. The latest controversy regarding knock-offs pits the FCA Group against Indian automaker Mahindra.

The dispute arises from the latter company’s intention to sell its all-terrain Roxor model in North America. As it happens, the design of the SUV mirrors that of the Jeep Wrangler.

This has not arisen out of thin air. Starting in the 1940s, Mahindra had entered into an agreement to build Jeeps with Willy, the company that produced Jeeps at that time.

Cut to the present day. The Indian manufacturer recently opened a new plant in Michigan to assemble the Roxor, a side-by-side-type all-terrain vehicle.

FCA has filed a complaint with the Federal Trade Commission, claiming that the design of the Roxor, with its square angles and flat surfaces, infringes on that of the iconic Wrangler.

A quick glance at the two models does make it appear they are virtually indistinguishable, even though the Roxor is quite a bit smaller. FCA is saying that the Roxor is a virtual identical copy of the old Jeep Willys.

"They are a nearly identical copy of the iconic Jeep design. In fact, the accused product was 'modeled after the original Willys Jeep.'”

The Roxor runs on a 4-cylinder turbo-diesel engine wedded to a 4-speed transmission. However, since it can only drive on marked off-road trails, its maximum speed is just 54 mph, or around 70 km/h. Mahindra is selling the model beginning at around $15,000 USD.

In response to FCA's complaint with the Federal Trade Commission, Mahindra declined to go into detail, but did issue a communiqué, saying, in short:

"We have reviewed FCA’s core filing and find it to be without merit”. 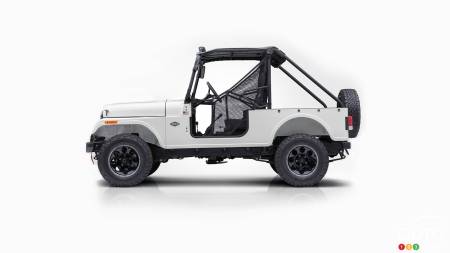 The next-generation new Jeep Wrangler gets ready to welcome its first special edition. Meet the Moab, as luxurious as the Sahara version but with the rugged ...

Jeep today unveiled its new 2019 Jeep Renegade at the Turin auto show. The small utility model retains its square format but benefits from several styling an...