With the return a few years back of the Chevrolet Colorado/GMC Canyon duo and of the Ranger from Ford this year, and with the Jeep Gladiator about to hit the market, it’s clear the midsize pickup segment is experiencing a somewhat unexpected revival.

Having duly taken note of this state of affairs, FCA is not intending to get left behind as the segment gears back up. Yes, it will have Jeep’s Gladiator in the game, but the questions being asked now is whether we’ll be seeing a revival of the Dakota truck.

The Dakota was pulled from the lineup about 10 years ago, around the same time that Ford kicked its Ranger truck to the curb. Needless to say that this left the segment wide open for Toyota and its Tacoma, which became the reference for midsized pickups. Nissan has continued to offer up the Frontier, of course, but as it hasn’t changed much in around 15 years, it tends to get forgotten – including by consumers. 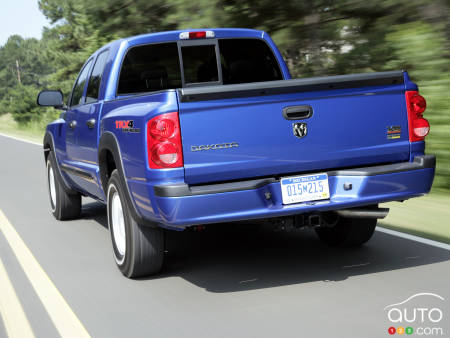 FCA Group boss Mike Manley had this to say to analysts during a conference call:

“The only vehicle missing in our portfolio is ... midsize pickups in the U.S. I'm working hard with the team to try and solve that."

This telling comment came in response to a question regarding the possible return of the Dakota to the FCA fold. The executive refused to confirm anything regarding the name the future midsize pickup might get.

Realistically, however, it would be pretty stunning if the company went with another name.

Should the Dakota in fact return, it would likely happen sometime around 2022, and be sold under the RAM banner. That division, by the way, aims to be selling 1 million vehicles annually by then. A revived Dakota would certainly help the cause…

FCA’s truck division is intent on producing a RAM midsize pickup. But the company acknowledges it continues to face hurdles in the development process. The m...

Ram has announced it it’s ready and willing to make electric-powered pickup trucks, but it wants the market to prove there’s strong demand for them. For now,...