Rumours have been floating for several years now the RAM lineup of trucks will welcome a new midsize pickup. These stories have at various times been denied and confirmed by FCA (Fiat Chrysler Automobiles). It’s been easy in fact for industry followers to lose the thread at times.

The arrival of the Gladiator from Jeep has reignited speculation about a baby RAM being in the pipeline. It does seem logical after all for the FCA Group to produce another model using the platform of its own Jeep rookie.

If only it were that simple. The company is acknowledging that, on paper, it’s a financial non-starter to go down that road.

FCA head Mike Manley, speaking during a recent earnings call, said that RAM is currently working hard to resolve logistics questions in the hopes of making the project of creating a smaller RAM truck a viable one.

"I want that problem solved frankly, because it's a clear hole in our portfolio. It will not be filled with Gladiator, because Gladiator has a very, very different mission. But trust me on that, they're focused on it." 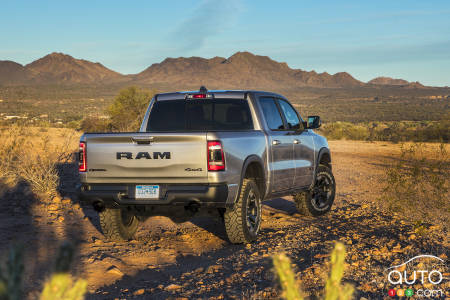 The issue is that a RAM truck built on the same platform as the Gladiator, and at the same plant, would be required to carry a price tag too high for it to be competitive and thus profitable. The challenge then is, quite simply, to find a way to produce a baby RAM at lower cost.

To give you an idea of the difficulties faced by the brain-trust at RAM, here are a few numbers: In the U.S., which is where success or failure will be decided, the Gladiator currently sells for $8,000 USD more than the Toyota Tacoma, long and still the king of the castle in this segment. The Gladiator also comes only in a single cab and bed configuration. Stack the Gladiator up against the crew-cab versions of the Tacoma and the Chevrolet Colorado, and the new Jeep still sells for about $6,000 more.

The spreads are roughly similar in Canada, though exact differences can vary depending on the trims being compared. No matter which way you look at it, the base price of the Gladiator higher. While this approach has not hampered Jeep in its efforts to market its unique new pickup, it very likely would be a different story for a RAM midsize pickup.

The challenge facing RAM is a major one. It would be possible to rework the platform to bring down costs and simplify it; but RAM is also looking at alternatives choices for production of the vehicle. Finding another place to assemble the vehicle (meaning, Mexico) would bring down the cost of production and constitute at least a partial solution to the pricing issue. But will consumers rebel against such a move?

The current batch of rumours has a baby RAM hitting the market in 2022. But unless FCA resolves the cost issues, that may end up being just more baseless speculation.

Fiat Chrysler Automobiles has confirmed that it is working to produce a new midsize pickup truck to under the RAM banner. This immediately set off rumoured r...

Ram has announced it it’s ready and willing to make electric-powered pickup trucks, but it wants the market to prove there’s strong demand for them. For now,...