Blink and you miss another head-turning announcement in the crazy world of the automotive sector these days. Automotive giant Stellantis confirmed today that it is working on an all-electric Dodge muscle car and an all-electric Ram 1500 pickup truck, with both models already in development and expected to be ready to go in 2024.

Neither of these announcements are a surprise, exactly, but they do fall into the Who Could Have Imagined This 10 Years Ago? category.

Dodge
Brand CEO Tim Kuniskis explained that with the famed Hemi V8 engine possibly approaching the limits of its potential, electric motors are the way to go to make their muscle cars go even faster. The executive added that in the past every boost in performance given to Dodge’s Challenger and Charger models resulted in increased market share.

The need for the automaker to meet ever-stricter emissions standards and eventually respect the outright ban of gas-engine vehicle sales in many jurisdictions probably has something to do with the decisions as well. But be that as it may, a drive for improved performance is clearly the pitch Dodge is making to explain the coming switch to electric-powered muscle cars.

Dodge describes the future EV as a coupe-style vehicle, and the short video it released implies that all-wheel drive will be part of the package. Also part of the tease is a retro triangular 1960s-era Dodge logo, seen below. The goal is for the model to offer a range of around 500 miles, or just over 800 km, which would be remarkable and a huge selling point.

It’s not known at this time whether the teased new EV is a replacement for either the Charger or Challenger, or both, or if it will be an all-new addition to the Dodge lineup. 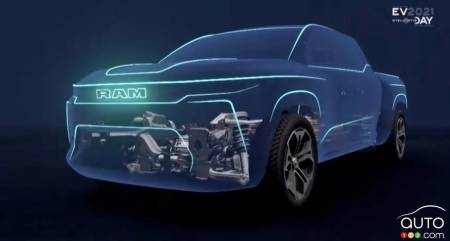 Ram
In the lucrative pickup segment, Stellantis is similarly jumping into the all-electric fray. Again, this is not a shocking announcement, but now it’s confirmed and the 2024 launch date has been set down as a marker.

According to Ram chief executive Mike Koval, the future electric-powered Ram 1500 will lead its category, which in 2024 will consist of the likes of the Ford F-150 Lightning, GMC Hummer, the Rivian R1T, Chevy's electric Silverado and probably others. Like in the case of Dodge, Koval says to expect a range of a bit over 800 km from the electric 1500.

The automaker has pledgaed that all vehicles carrying the Ram badge will be electrified in some way by 2025. The brand's chief design officer Ralph Gilles mentioned that eight new Ram models are planned, and that one of them will be a mid-sized pickup.

Stellantis confirmed as well that we can expect 4xe hybridized Jeep models across that company’s range in the coming years.

Stellantis plans to create four different dedicated BEV platforms that will be used across its 14 brands. Dodge’s muscle cars will be built on the STLA Large platform, while Ram’s trucks will use the STLA platform. Company CEO Carlos Tavares has said that 98 percent of its models from 14 brands in Europe and North America will be electrified by 2025. And by 2030, at least 40 percent of the vehicles it sells in North America – and 70 percent in Europe - will be all-electric.