You've already seen the scene, especially in the summertime here in Canada. A car drives along the road and the front-row passenger is lounging comfortably with his feet up on the dashboard.

It’s not actually difficult once you think about it to imagine how dangerous the gesture can be. The injuries that can result in the event of an accident can be very serious and even a minor fender bender in which the airbags deploy can have disastrous consequences.

If you can't convince the person accompanying you to put their feet down, an image circulating on the internet should do the trick. 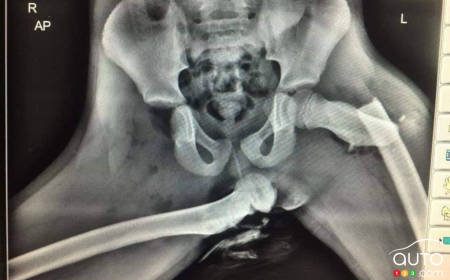 The X-ray, posted by a police sergeant in Wales, is of the pelvic region of a young woman who learned her lesson the hard way. Her femur has been broken, one of her hips has been severed in its orbit and the other has been dislocated and is nowhere near where it should be.

The woman's injuries were described by police as life-altering.

Audra Tatum of Chickamauga, Georgia, was permanently disabled in 2015 as a result of what was a minor accident. While other occupants of the car suffered minor scratches and bruises, the young woman was not so lucky. On impact, the airbag in front of her deployed and threw her foot into her face, breaking her nose, femur and ankle in four places.

"Basically, my whole right side was broken because of my ignorance," she said. "I'm not Superman. I couldn't get my feet out in time.”

There’s sad irony in the fact that Audra Tatum was an EMT herself before her accident.

A few years ago, the Chattanooga, Tennessee fire department posted a hard-hitting message on Facebook that was widely distributed. The message explained that airbags deploy at speeds between 160 and close to 400 km/h. "If you have the habit of keeping your feet on the dashboard and you're involved in an accident, the airbag can send your knees through the sockets of your eyes," it said.

So the next time you get the idea to put your feet on the dashboard, or you see your passenger do so, think about this image or just show it to your loved one. Your car will do a much better job of protecting you and your passenger in the event of an impact if you pay heed to this warning.

Hyundai’s New Airbag to Protect Occupants… From Each Other

Hyundai has unveiled a new airbag designed to work in the space between the two front-row occupants of a vehicle. In the event of a crash, the airbag will de...