The LX is not exactly Lexus' top-selling model, but since 2016, it has seen sales grow in Canada to about 1,000 units each year. That pace has slowed somewhat so far this year, but the company will have a new generation starting in 2022, which should help its sales performance rebound.

In the United States, sales have also been stable for the past few years, but it’s worth noting that until now, the LX's cousin, the Toyota Land Cruiser, was also available right alongside it. That model’s existence frankly explains the presence of the LX over at Lexus; without the Land Cruiser, a very popular global product, we might not have an LX.

For 2022, the Toyota Land Cruiser will continue its career elsewhere in the world, but it will no longer be marketed in the United States. Lo and behold, however, the Lexus LX will survive; Toyota has even registered the name LX 600 on this side of the Atlantic.

Last week, a veiled silhouette of the next edition of the LX was features in Lexus’s video unveiling the new 2022 NX.

Unlike with the current LX 570 model, which is equipped with a 5.7L V8 (383 hp and 403 lb-ft of torque), the new LX's nomenclature won't match the engine's displacement. Instead, under the hood of the LX 600 is expected a twin-turbocharged 3.5L V6 engine, the same unit that will power the new, global-market Toyota Land Cruiser, and which is good for 409 hp and 479 lb-ft of torque. A 10-speed automatic transmission is to be included standard, as is the four-wheel-drive configuration. A hybrid version is expected to arrive later with the same iForce Max powertrain earmarked for the 2022 Toyota Tundra.

As for the new styling of the LX, we can see in the released photo L-shaped light accents and the familiar Lexus front grille. The model will continue to differentiate itself from the Land Cruiser in terms of style and luxury, of course. Where the family connection between the two models is most apparent is in terms of the off-road capabilities. Meaning, an LX, like a Land Cruiser, can go just about anywhere.

The 2022 LX is expected to be presented in full before the end of the year. Its market launch is scheduled for early next year. 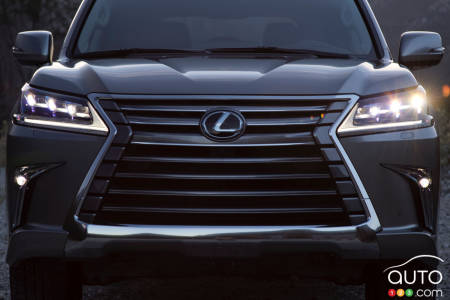 Lexus Introduces the Next Generation of its Big LX… and I...

Lexus has finally introduced the next generation of its LX SUV, which has been over 15 years in coming. As you’d expect and hope, the model has evolved in ev...

Lexus will introduce the second generation of its NX SUV on June 11. Expect some changes, of course, but also some continuity, as the NX has been a solid sal...

The Lexus LX 600 2022 is a luxury behemoth that served as a deft companion on a short family road trip. Here's our review.