A 7-speed manual gearbox for the new 2021 Ford Bronco? It could happen.

While we continue to await the official presentation of the new 2021 Ford Bronco, there’s plenty of time for speculation as to the details of the reborn SUV model. The latest will be of interest to many potential buyers; the TFL Car site reports that the 2021 Bronco will be available with a 7-speed manual transmission.

This would not be a conventional gearbox, rather there would be a gear located in a very low range and with an even shorter stroke than the first gear. In the shift schematic, this gear would be located below and left of first gear, making it difficult to switch to it accidentally. In addition, there would be a mechanical lock to prevent the transmission from shifting into this lower gear in normal driving.

The idea of course is to optimize off-road driving. The source who spoke with TFL Car also mentioned that the SUV could be fitted with 255- or 285-mm tires, other elements that will make it more efficient off-road. 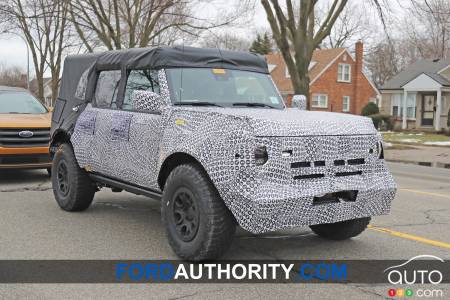 On board, the layout of the dashboard will be very similar to that of the new F-150. Among other things, the air vents that flank the multimedia system screen are the same, except that they're a little longer. Under the monitor are the controls for the climate control system and the radio. Of course, everything will vary from one version to another, but the upshot is that Ford borrowed from the F-150 to design the Bronco's interior.

It shouldn’t be much longer before all or almost is revealed about the vehicle. Recall that the vehicle was supposed to get its big reveal last March at a static and technical presentation in Detroit, but that event was cancelled at the last minute because of the coronavirus.

Since then the Bronco's presentation schedule has been turned upside down, but we’re likely to meet the real deal soon. We hope. 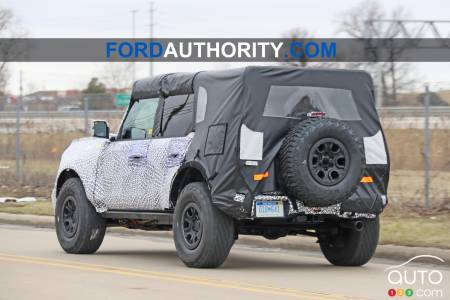 Ford is making available the Sasquatch package with the manual transmission version of its Bronco. The company says it made the adjustment after hearing repe...

A Petition is Up Online Calling for a Manual Gearbox in A...

An online petition has been started to compel Ford to offer a manual transmission in all versions to its new Bronco SUV. Currently, the Bronco is only availa...