Yesterday, Ford provided some new and updated information about what it’s up to in terms of electrification, and there was some interesting material to be had to say the least.

In fact, the company spent the morning talking about its future, saying for instance that it expects 40 percent of its sales to consist of all-electric models by 2030. That’s a significant amount, and it means the firm needs to introduce a lot of new models by then. Two that appear to be on the drawing board are all-electric versions of the Explorer and the upcoming Bronco.

Mike Levine, Ford's director of product communications in North America, took to Twitter to spread the word about these two vehicles. He first posted a tweet showing a photo collage of the presentation given by Ford, which shows the outline of what appears to be a 4-door Bronco mounted on an electric vehicle platform. The square shape is pretty obvious in itself, but the tire hanging on the tailgate is the kicker.

Mike Levine even referred to "rugged SUVs" in his post. While Ford has not officially confirmed that an electric Bronco is coming, this is pretty darn close... unless they're preparing another such vehicle. 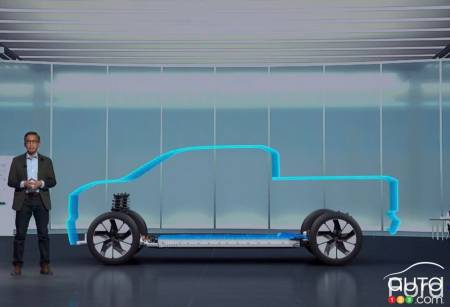 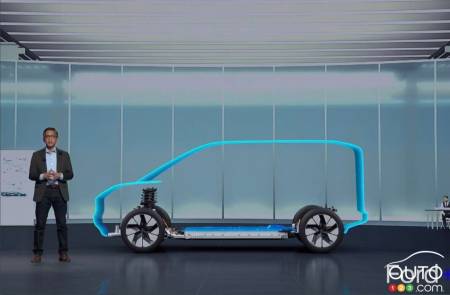 During its presentation, Ford also showed silhouettes of an electrically-powered pickup truck and van. The company has already presented the F-150 Lightning and the E-Transit, but you can expect other electric models to take advantage of the two new all-electric platforms the company announced. Mike Levine replied to his own tweet by explaining that there is also “an all-new full-size pickup truck EV architecture in development.”

In addition to the Bronco news, Mike Levine referred to a future electric Explorer. “Yes, we will fully electrify the Explorer, as you might expect, given our plan to deliver 40 percent of our lineup as all-electric by 2030”, he tweeted, making it officially official that model will be developed.

Of course, Ford sells about 200,000 Explorers each year, so not offering an electric version would make no sense, considering where the industry is headed.

Levine also hinted at future electrified “icons” coming to market one day, though he didn't specify which models. Currently, Ford considers the following models to fall into that category: Bronco, Bronco Sport, F-150, Mustang, Mustang Mach-E and Ford GT. It's unclear about the GT, but all-electric versions of both the Mustang and the Bronco Sport are extremely plausible within the decade.

See also: The Ford F-150 Lightning Enters the Scene: A Flash of Genius?

Ford has introduced the SSV version of its F-150 Lightning, a model designed for police forces. It joins the Mustang Mach-E as Ford's second electric vehicle...

Ford Has Enough Battery Supply to Produce 600,000 EVs a Year

Ford says the signed agreements it has in place are enough for it to be able to produce 600,000 electric vehicles per year, and this by the end of 2023. The ...