Ford presents its highly anticipated F-150 Lightning all-electric pickup. The truck should make its commercial debut in the spring of 2022.

We’re finally there! After years of commitments and development and waiting, the all-electric version of the Ford F-150 has been presented by Ford. The F-150 Lightning, which is of course the latest use of a name that has served the brand for nearly 30 years, looks set to revolutionize the pickup truck world with a host of innovations that are sure to set some new standards.

In fact, Ford is doing what it has always done with its F-150: it's making sure it stays ahead of the curve by offering what's owners want, and some things they didn’t even know they wanted. And then more. As you'll see, the F-150 Lightning is packed with features are as innovative as they are remarkable. While today's generation pickup trucks have gone from being simple work tools to versatile family vehicles, tomorrow's pickup truck is going to become even more so going by what the electric F-150 is bringing to the table.

Aesthetically, the family traits are clearly visible, but the front end gets a just-as-clearly distinctive look. There's the lighting that surrounds the front grille for an unmistakable presence, but also the design configuration that makes it so when you lift the trunk (or frunk, as Ford calls it, since it’s in the front), the grille follows in order to ensure an accessible loading threshold.

That front grille, by the way, gets a completely distinct design from the other F-150s since it’s no longer necessary to send air to the engine. 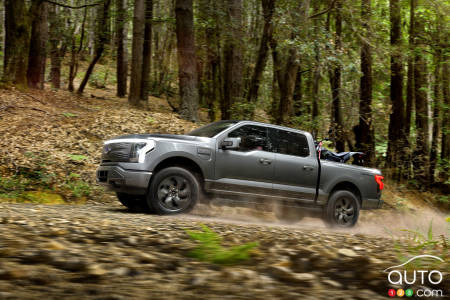 Versions
There are basically four versions of the model. In addition to the commercial version, the offering also includes XLT, Lariat and Platinum trim levels. The model is expected to launch next spring. As for the bodywork, currently we’re talking about a Super Crew cab with a 5.5-foot bed. Depending on the demand, we’re guessing other configurations could eventually see the light of day.

There will be a few possibilities in terms of configuration. First of all, a two-engine architecture is used for all versions that offer four-wheel drive. However, there will be two options: a standard battery that offers the regular 370 km of range, or an extended-range battery good for 483 km. The former is standard on the XLT and Lariat models, while the latter comes on the Platinum model. Note that the extended-range battery can be chosen as an option with the other two models.

As for output, it all sounds pretty good at 426 and 563 hp, respectively. Torque, meanwhile, is rated at 775 lb-ft. Equally impressive is the given 0-100 km/h acceleration time of about 4.5 seconds with the most-powerful model. And for work, a payload of 2,000 lb is reported with the standard model (1,800 with the Long Range). For towing, it's 7700 lb with the regular version and up to 10,000 lb with the Long Range model featuring the Max towing package. 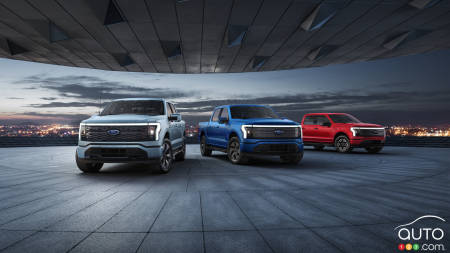 The structure
The Ford F-150 Lightning benefits from a new frame that Ford describes as the strongest steel frame ever built into an F-150. It also has a new independent rear suspension. Ford promises increased comfort.

Underneath the vehicle are strategic skid plates. Sure, they'll protect you on off-road excursions, but more importantly, they'll act as a shield for the vehicle's components, including the battery, which sits in a waterproof case. And if you're worried about heat differentials, Ford assures you that the F-150 Lightning has been tested in the worst conditions, from unbelievable Siberian cold to extreme heat.

Interestingly enough, to close with the physical capabilities, the model is equipped with integrated scales that use the vehicle's sensors to estimate the payload that’s being carried. This is linked to the vehicle's range function so that the driver can know the actual range they have based on the weight being carried.

Now we're talking. And this is going to reassure all those who fear that range will melt away when there are substantial loads to pull.

A power central
We've already seen a glimpse of what's possible with the hybrid version of the F-150 - the ability for the vehicle to suddenly become a power source. With the Pro Power Onboard package, you can plug in your tools on the job site to get stuff done. F-150s were even seen powering homes during the Texas cold snap earlier this year when power outages were widespread.

Of course, the electric version of the model will be able to do all of that, but also much more. Specifically, and this is impressive, the F-150 Lightning will be able to power a home for three days in the event of an extended power outage. And if you only use the essentials, Ford is talking about nine days.

But it gets better. Ford will introduce a smart power program a little later. And if you’re concerned about how much electricity the truck will drain, well if you’re signed up for a home electricity plan that has you pay more for electricity during peak hours and, conversely, enjoy better rates during off-peak hours, you can use the battery in your electric pickup to power your home during those times when electricity is sold to you at a premium. Then, at night, you can recharge your vehicle at discounted rates. 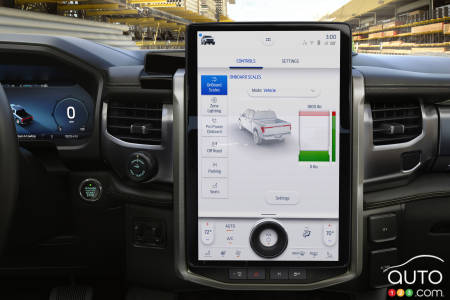 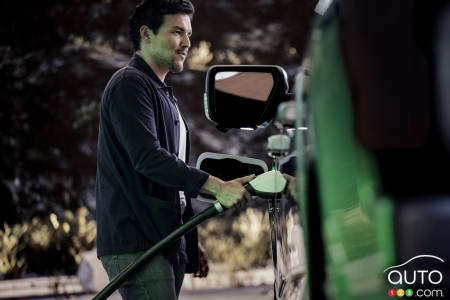 That's what I call a flash of genius. Actually, I didn't see that one coming. It's a great idea that will have a big impact and that, in a number of years, may change a lot of things in our habits. To be continued.

And to conclude with what this vehicle can do in terms of power, Ford talks about a power of 9.6 kW at your disposal; 2.4 kW in the front trunk in the form of four electrical outlets, then 7.2 kW in the body, again in different forms (four 120V outlets, one 240V). There are also two 120V outlets in the cabin.

There’s of course much more to the offer with the F-150 Lightning. We could go on and on, but in the interest of concision, here’s an overview of what else buyers will get from their Lightning.

- An autonomous driving function will be included. The Blue Cruise system allows for driving on 160,000 km of highways in the United States and Canada in near-autonomous mode. Other stretches of road will eventually be added. We’ve seen something similar with GM's Super Cruise system and its 230,000 km network of charted roads.

- On board, certain versions will feature the largest multimedia screen in the category at 15.5 inches.

- The front trunk (or frunk) offers 400 litres of cargo space and can hold up to 400 lb of gear. In addition to its four power outlets, it also features two USB ports.

- On some versions, the Sync 4A system goes further with a more natural voice command system, as well as navigation via the cloud. Access to Apple CarPlay, Android Auto, as well as Amazon Alexa apps are of course included.

- Drivers will be able to enjoy a digital display screen in front of them. With a size of 12 inches, it will offer him the information he wants to find there, including of course the details about its autonomy.

- Over-the-air software updates will become the norm with this F-150 Lightning, via the Ford Power-up application.

- The vehicle is going to be built in a new plant located on Ford's Red Complex in Michigan.

- Of the $22 billion the company is investing in its electrification program, the F-150 Lightning is the beneficiary of a good chunk.

- On a very fast charging station, it’s possible to recover 48 km of range per hour. Capacity can be increased from 15 to 80 percent in 41 minutes on a 150 kW charger. 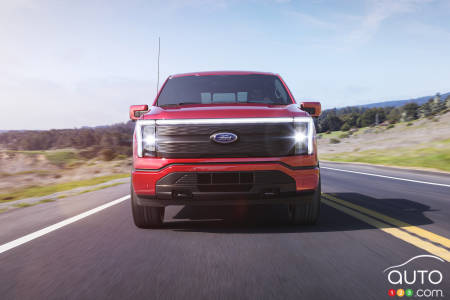 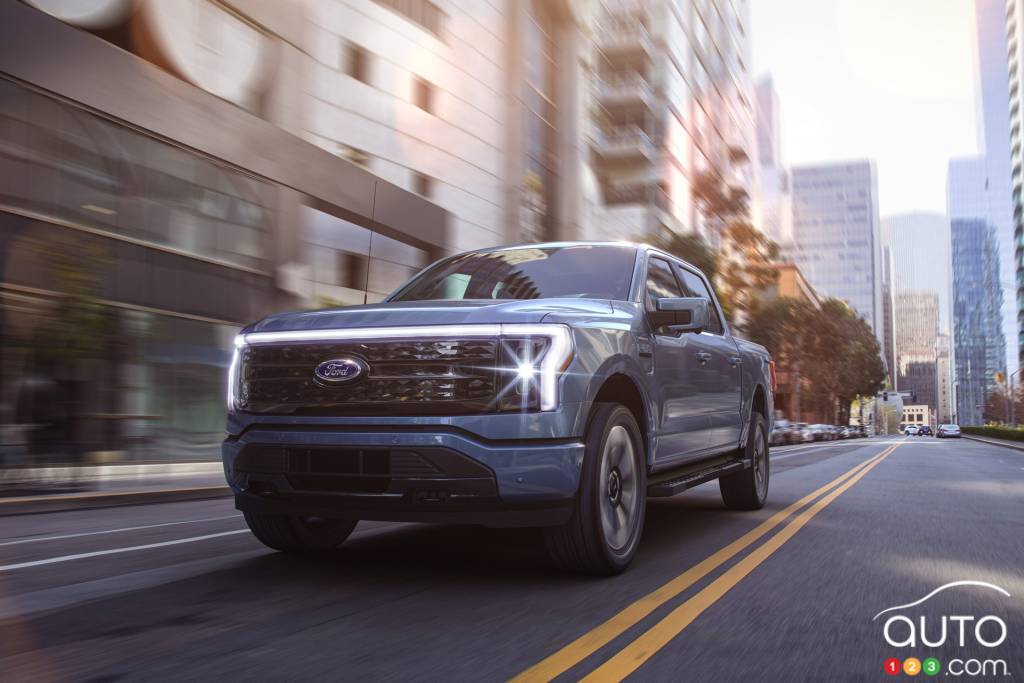 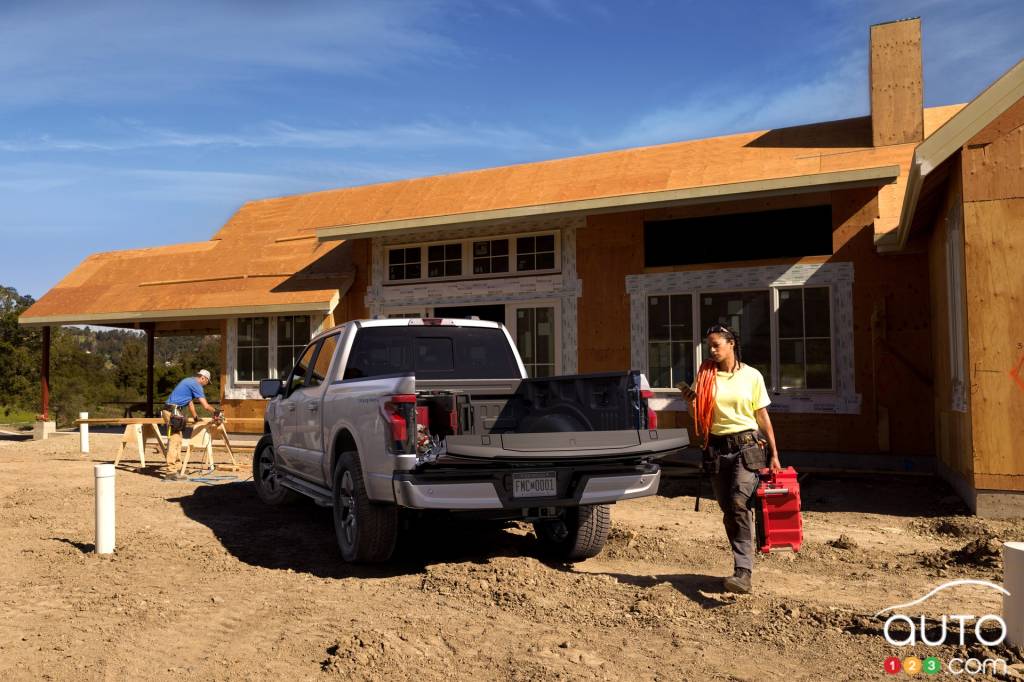 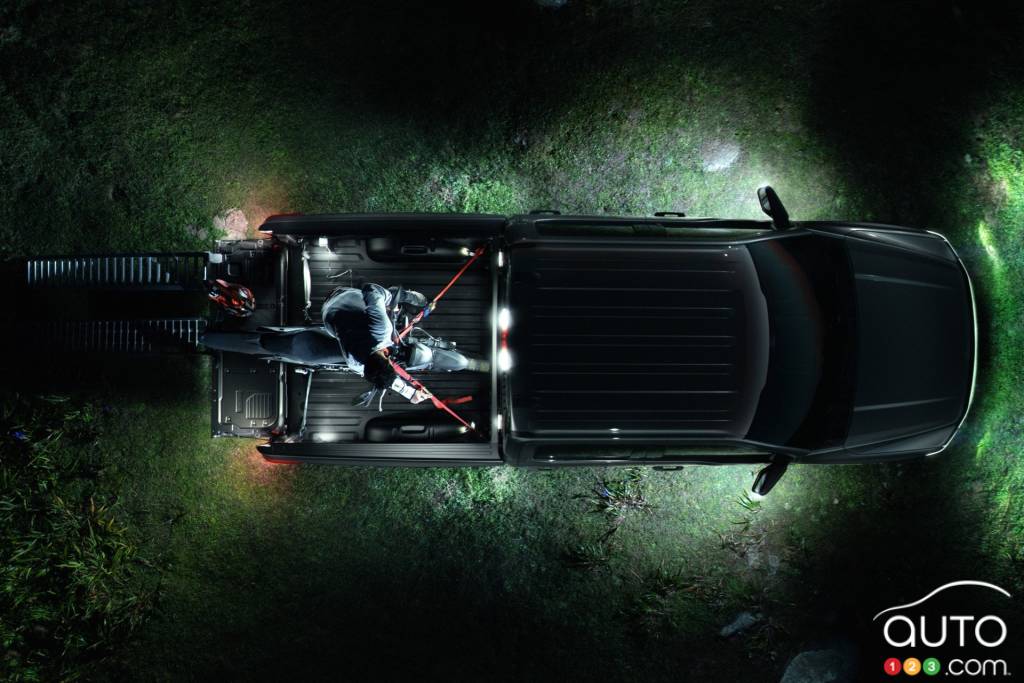 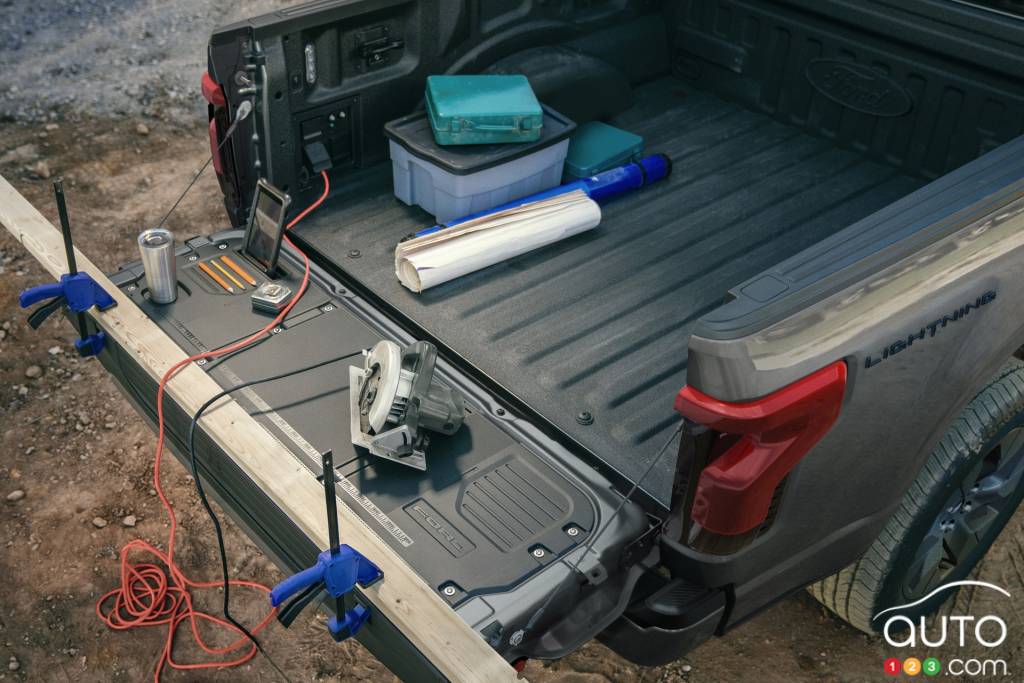