You’ve heard about Rivian’s plan to develop and market an electric commercial delivery van, with Amazon its principal customer out of the gate. The retail giant has ordered 100,000 units of the future Rivian product.

The widespread use of electric delivery vans is only a matter of time. Mercedes-Benz began production of the eSprinter last December, while Hyundai and Kia bought British electric van manufacturer Arrival, which has an order for 10,000 units under its arm from UPS.

Now it's Ford's turn to throw its hat in the ring. The company, which dominates the delivery van market around the world, will offer an all-electric Transit for the U.S. and Canadian markets.

Ford in 2019 announced an electric Transit van for the European market, with 2021 the target date. The American automaker has been testing electric trucks and delivery vans in the Old Continent with shipping giant DHL for several years now. Now we learn that North America will be next to receive the Electric Transit. In this case the aim is to bring it to market by 2022. 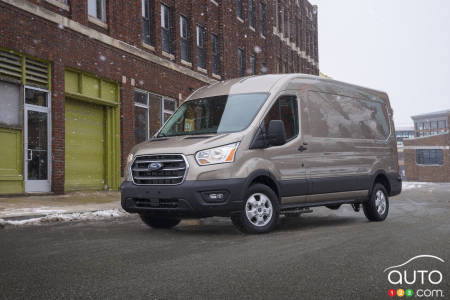 The Electric Transit will be the third Ford electric vehicle to be introduced in North America, after the Mustang Mach-E and the F-150, whose arrival is pending and is also eagerly awaited. Considering the fierce loyalty of the latter model’s clientele, very big things are expected of that EV.

Ford says its sales of commercial trucks and vans have increased by 33% since 2015; last year it sold close to a quarter of a million units globally. Offering an electric option will help customers meet increasingly stringent emissions regulations being implemented by municipal and state governments, reduce their own company's carbon footprint and even comply with noise reduction regulations.

In addition, the Electric Transit will be a more-connected vehicle with capabilities to help operators better manage their fleets. Like all electric vehicles, it will also have the advantage of being easier to maintain and cheaper to operate.

Ford’s announcement made mention of fleet tracking capabilities through Ford Telematics and Ford Data Services, a Wi-Fi network, and a full suite of driver assistance security technologies, but other otherwise there were few details about the electrified version of the Transit. We do know it will be available in a variety of configurations - cargo van, chassis cab, and with three roof heights and three body lengths, among others. At the moment, details regarding performance and capacity remain unannounced.

The van will be "American-built," Ford said in its announcement. It is part of the automaker's commitment to spend $11.5 billion on electrification through 2022.

Ford is recalling 75 units of its new Mustang Mach-E due to a fault with the chassis. Fortunately, the majority of affected models will be repaired before be...