We’ve known for some time that both the Ford Flex and Lincoln MKT utility models were living on borrowed time. Ford has now made official that production of the Flex is coming to an end next month.

The last Ford Flex will thus be assembled the week of November 25. You’ll recall that the MKT ceased being produced earlier this year. At Ford’s assembly plant in Oakville, Ontario, it was common knowledge that the Flex model was going to be eliminated, so there was no surprise to greet yesterday’s announcement, but it was still difficult to hear the official announcement. About 450 workers at the plan will be laid off.

The layoffs take effect at the beginning of next year, and they come in addition to some 200 layoffs already announced earlier this year. That came as part of Ford’s reorganization of production to align with demand, according to the company. The Oakville plant also produces the Ford Edge and Lincoln Nautilus SUVs.

Jerry Dias, president of the Unifor union that represents the plant’s 4,600 workers, said he is trying to organize a meeting with Ford representatives to see what can be done to find other positions for the workers affected by the end of production of the Flex.

The Flex, you can probably guess, has suffered from weak sales in recent months. In the U.S., Ford sold 18,337 units of the SUV between January 1 and September 30 of this year – the least of any truck in the brand’s lineup. In Canada, 2,418 consumers bought a Flex over the same period, while only 86 Lincoln MKT models found buyers in that time. 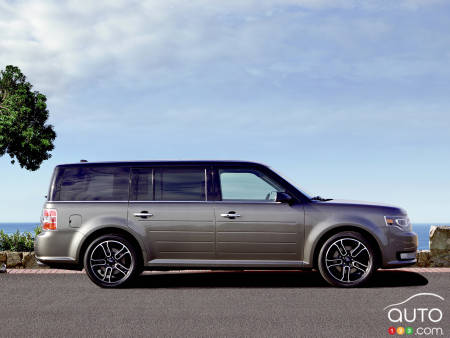 Exclusive features and cutting-edge style will define For...

Blasting Ford into the market's most popular segment is the job of the upcoming Flex- a hauler that the automaker says will redefine the modern family journe...