Dearborn, MI – The blue oval manufacturer is no different than other automakers in the present environment. Ford must be constantly revisiting its strategy to keep up with the demands of a quickly evolving marketplace, one headed inexorably towards greater electrification and autonomous driving.

This week Ford invited several members of the automotive press to its facility in Dearborn, Michigan for a discussion about the future of mobility, the challenges facing Ford and other manufacturers, even the products that will be joining the carmaker’s lineup alongside the iconic Ford Mustang. From the discussion, it’s clear that changes are afoot!

Over 75% of the fleet renewed by 2020
Joe Hinrichs, President of Global Operations for Ford, confirmed during the presentation that 75% of Ford vehicle models would be renewed or refreshed by 2020, with the addition of four new models (two cars and two SUVs), all in this short time frame.

Escape and Explorer short-term priorities
The popularity of utility models is a subject on everyone’s lips, and Ford is no exception. Already the American automaker proceeded, earlier this year, with a revamp of the largest vehicle on tis roster, the Ford Expedition, in addition to adding a smaller sibling to the Escape, the EcoSport, now the smallest crossover made by the manufacturer.

If the Ford Edge is revised in 2019 – with the introduction of the first performance SUV to carry the ST badge in the company’s history – we’ll be keeping an eye on the other two SUVs in the lineup. The current generations of both the Explorer and the Escape have been around for a few years now.

Ford even confirmed that these two specific models would be offered with a hybrid powertrain in the future, a sign that confirms the importance of these vehicles for the company. We got the opportunity to see what the two might look like, and at first glance, it looks like Ford engineers did a bang-up job. Want more?

The SAT movement will also extend to the Explorer. Will it get the 3.5L EcoBoost V6 used in the Raptor? We can always hope!

The showstopper, and a great surprise: the 2020 Ford Bronco!
As in the industry at large, Ford does intend to limit itself to modifying its utility models. You may have heard that Ford has already confirmed the return of the Bronco for 2020. The 4x4 will use the basics of the Ford Ranger when it enters into production at the assembly plant in Dearborn.

At the press conference we saw a short video showing what the future rival to the Jeep Wrangler will look like; obviously many details remain to be worked out, but it’s safe to say that fans of the classic first model that debuted in 1966 will be thrilled. This image of the reborn Bronco shows a square silhouette with pronounced wheel arches and a spare tire mounted on the rear hatch. 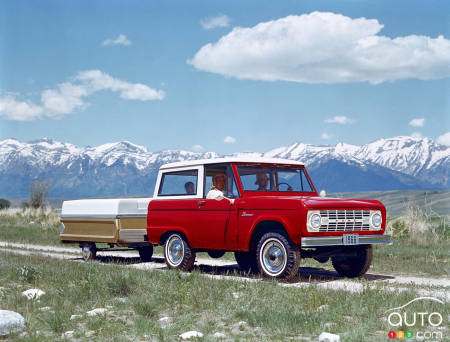 Ford also has this other utility model that looks like a 4x4. There’s no name yet for this compact SUV, and we expect that it will use the same platform as the redesigned Escape. Ford is promising a vehicle capable of serious off-roading. While the image provided by Ford reveals little, it does give a general idea of the character of this other SUV we should be seeing in a few years.

A word about Lincoln
Not too much time was spent at the presentation on the Lincoln brand, but we can tell you that more utility models are on the way. In fact at the end of this month, at the New York auto show, the luxury banner will likely unveil one new model, followed in the coming months by another utility vehicle. According to Ford representatives, the lineup of SUVs will continue to grow in the next few years.

Fewer platforms
Ford is also following the industry trend towards greater simplicity. The plan is for the engineering department at Ford to work with just five different platforms. Among them, a single-structure architecture with front-wheel drive, another with rear-wheel drive, and one devoted to commercial vans. As well, a scaled chassis platform is in the works for trucks, while the company intends to take on the electric vehicle segment with a platform specific for these models.

Reducing the number of platforms allows Ford to develop more models without having to redesign the mechanics involved.

More hybrids and electrics
Unsurprisingly, Ford also stated its wish to lean more on alternative energy sources. Hybrid, plug-in hybrid and all-electric version are likely to multiply at a great rate by the time 2021 rolls around.
Among the, the Ford Mustang and Ford F-150 hybrids and other electrified SUVs will be among the models coming in the near-future to Ford dealerships. The ambitious plan is to supplant Toyota at the top of the sales parade for hybrid and electric vehicles in the United States within the next three years (Ford is currently second).

Ford Co-Pilot360
While we await the arrival in full of the automated mobility reality, engineers attached to safety detail are working to improve safety levels for motorists. Ford has announced the arrival of the Ford Co-Pilot360, a name that regroups 5 features (automatic braking with pedestrian detection, blind spot detection, lane keep assist, backup camera and automatic headlights).
These technologies are not new at Ford, but what is new is that company is offering them standard in all of its vehicles. This will begin with the new Ford Edge this fall, followed by the 2019 Ford Ranger at the beginning of 2019.

More connected in the future?
The Dearborn presentation also touched the question of connectivity. Ford has already made great strides in this area, and it stated that by 2020, wireless updates for programs will be available for vehicles, along with the availability of new functionalities. The automaker also wants to give consumers new tools to buy its products online, for example by offering fewer trims and allowing buyers to customize more freely their vehicle.

What stood out during the Ford presentation is that the company does not want to be outflanked in any of the segments it competes in, whether that involves the types of powertrains, industry trends or connectivity. Ford wants to make sure, in other words, that it stays in the game!

The 2018 Ford Mustang and F-150 are making their Canadian debuts this week at the Canadian International AutoShow in Toronto. Visitors to the salon will als...

Articles By
Vincent Aubé
Top 10 Vehicle Interiors in 2020 According to...
Article
Speed Dating: We Spend an Hour With the 2021 ...
Article
The Vehicles with the Best Retained Value, Ac...
Article
More from this author