General Motors has announced it is building a new EV battery cell innovation centre in Michigan, which will allow the automotive giant to reduce costs associated with the technologies surrounding electric vehicles and help it deliver on its electrification commitments over the next decade. This comes just days after Ford announced a new multi-billion-dollar investment of its own into a new production facility devoted to production of the Ford F-150 Lightning and other EVs as well as components for them.

The Wallace Battery Cell Innovation Center, as it’s to be called, is named in honour of Bill Wallace, the late director of battery systems and electrification for GM. Under his watch, the company produced the Volt (first and second generations), the Malibu hybrid model and the Bolt EV. Wallace died from cancer in 2018. 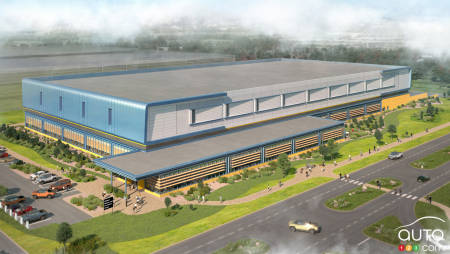 The advantages of creating such a centre are evident for GM. The company will be able to produce more of the components needed for its future EVs in-house instead of depending on overseas suppliers (hello, global microchip shortage). It will also make it much easier and less costly to develop new technologies, notably those related to the future generation of EV battery systems based on lithium-metal and silicon, for example.

Lastly, there will be a focus on optimizing manufacturing methods at battery plants, easier to do with a brand-new facility, and then exporting them to other plants producing batteries.

“The Wallace Center will significantly ramp up development and production of our next-generation Ultium batteries and our ability to bring next-generation EV batteries to market. The addition of the Wallace Center is a massive expansion of our battery development operations and will be a key part of our plan to build cells that will be the basis of more affordable EVs with longer range in the future.”

It’s hoped the new plant will start building prototype battery cells before the end of 2022, with commercial production beginning by mid-decade. GM officials say they’re confident the new Innovation Center will help them reduce the cost of producing batteries by at least 60 percent.

GM says the investment it’s making in the plant runs onto the hundreds of millions of dollars, with hundreds of new jobs created in the process. What’s more, there’s room for eventual expansion at the location; according to GM, the footprint of the centre could increase threefold if needed.

GM Won’t Build Trucks for the Nikola Group After All

GM won’t be building trucks for the Nikola group after all. Allegations of fraud leveled against the fledgling company may have helped derail a deal made bet...

GM Investing $2 Billion to Refit Another Plant for EV Pro...

GM announced another $2 billion investment in EV production, this time to refit its Spring Hill, Tennessee plant so it can build electric vehicles. One of th...