Car rental company Hertz filed for bankruptcy protection this past Friday. The company has been unable to withstand the devastating effects of the pandemic that has literally put an end to worldwide travel and, with it, threatened the 102-year-old company's operations.

Today, the company is being crushed under the weight of its debts. Hertz’ lenders refused to give the company, based in Estero, Florida, a further extension to make its payments past last Friday, forcing it to file for bankruptcy protection.

Hertz and its subsidiaries will continue to operate, according to a statement released by the firm. Hertz's major international operating regions and franchised sites are not included in the bankruptcy filing, according to that statement.

At the end of March, Hertz Global Holdings Inc. had accumulated $18.7 billion in debt with only $1 billion in available cash.

Starting in mid-March, the company - whose car rental subsidiaries also include Dollar and Thrifty - saw its revenues evaporate when travel was halted due to the novel coronavirus outbreak. As a result, it began missing payments in April. Hertz has also seen upheaval at the management level, with the appointment of its fourth CEO in six years on May 18.

“No business is built for zero revenue,” explained former CEO Kathryn Marinello on May 12 on the company's first-quarter earnings conference. “There's only so long that companies' reserves will carry them.”

At the end of March, Hertz laid off 12,000 workers and placed another 4,000 on leave, reduced its vehicle purchases by 90% and stopped all non-essential spending. The company said the measures would save $2.5 billion a year.

Evidently, these cutbacks came too late to save it. Hertz is the American number-two in car rentals, ahead of Avis/Budget but behind Enterprise.

In a note sent to investors at the end of April, analyst Hamzah Mazari of Jefferies predicted that rival Avis would survive the coronavirus crisis, but that Hertz had only a 50/50 chance “because it was slower to cut costs”.

Hertz filing for bankruptcy protection came as no surprise. In its first quarter report filed in early May with financial market regulators, the company stated that it may not be able to repay or refinance its debt and that it may not have sufficient liquidity to continue operations.

“Management has concluded there is substantial doubt regarding the company's ability to continue as a going concern within one year from the issuance date of this quarterly report,” it stated.

In a Chapter 11 restructuring, creditors have to settle for partial repayment, but the firm is likely to continue to operate.

Hertz is not the first financially wobbly company to be pushed into bankruptcy by the coronavirus crisis. We’ve seen the same happen to the J.C. Penney department store chain, as well as Neiman Marcus, J.Crew and Stage Stores. 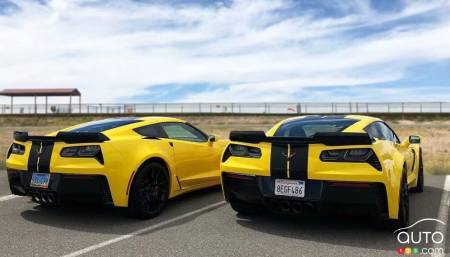 Hertz will resume purchasing vehicles to replenish its fleet of rental vehicles using financing secured from its creditors. Hard hit by the coronavirus crisi...

A fire destroyed 3500 rental cars in the parking lot of a Florida airport. The cars were parked on grass on a temporary parking area, idled by the coronavirus.

The Detroit Auto Show has been cancelled for 2021. In fact, some events will take place and be twinned with another automotive gathering scheduled in Michiga...