Honda has already announced its intention to have two-thirds of its global sales consist of at least partially electric vehicles by 2030. It is a highly ambitious goal, to be sure, especially when we count up the less-than-successful attempts the company has made in the segment up to now.

The first test of that goal's attainability starts right now. It remains to be seen whether the new 2018 Honda Clarity Plug-In Hybrid will succeed where the Insight, CR-Z and Civic Hybrid, all now defunct, did not. But the company did keep its promise to deliver its new electric model to the Canadian market before the end of 2017, if only just! 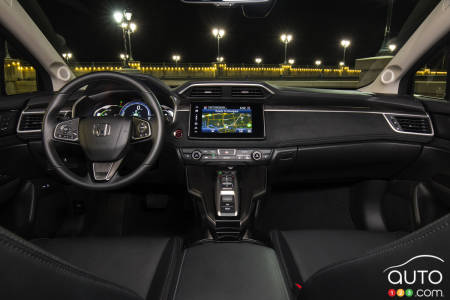 Competitive performance
The 2018 Honda Clarity Plug-In Hybrid as an average energy-use rating of 2.1Le/100 km thanks to its 76-km range in electric mode – slightly less than the Chevrolet Volt, but more than the Toyota Prius Prime, Ford Fusion Energi and Hyundai Sonata plug-in hybrid. In other words, you can complete most of your daily comings and goings without ever calling on the gasoline engine.

Its dual-motor powertrain gives the Clarity Plug-In Hybrid a total power output of 212 hp and 232 lb-ft of torque. Owners will find more to like in its 17-kWh battery, rechargeable in just 2.5 hours when using a 240-volt station.

Keep an eye out in early 2018 for our review of the Honda Clarity Plug-In Hybrid, or drop in at your nearest Honda dealership to check it out for yourself!

Here is a spacious and sophisticated sedan that stands out from the competition with an EV range of 76 km. Any potential buyer should take some time to watch...

2018 Honda Accord Available at Dealers Soon: Here is Pricing

Entirely redesigned, the 2018 edition of the venerable Honda Accord midsize car answers the challenge laid down earlier this year by the new Toyota Camry. Wh...