Any rumour worth its salt involves something people could get all excited about. Here’s an example: there is new speculation that Honda is considering marking its 75th anniversary with the introduction of a new-generation S2000.

Recall that back in 1999, the arrival of the initial Honda S2000 coincided with the 50th anniversary of the brand. If the new rumours are to be believed, Honda might well celebrate its 75th in 2024 with a new edition.

The information comes to via a report in Forbes magazine, which simply quotes the trusty old “source close to Honda”. This source explains that the company's marketing team is "seriously considering" a new version of the S2000. Recall as well that on the 20th anniversary of the S2000's 1999 debut, a new design study was presented in Japan, so the idea has clearly been circulating for some time in Honda's offices.

According to Forbes, this new S2000 would be similar in proportions to the original and would make substantial use of aluminum and carbon-fibre to hold the car under the 3,000-lb barrier. As for the engine, Honda is said to be considering a 350-hp version of the 2.0L, turbocharged 4-cylinder engine found in the Civic Type R.

The rumour is juicy, of course, but many questions remain unanswered. First of all, this isn't the first piece of speculation to arise concerning the return of this model, and it hasn’t happened yet so a small grain of salt is called for. In addition, developing such a model would almost necessitate partnering up with another manufacturer to reduce development costs, something Honda has always been reluctant to do.

Plus, the S2000 would come with a different architecture than the Type R version of the Civic. With more-expensive materials and a convertible configuration, costs would rise rapidly. Would customers be willing to pay more than $50,000 or even $60,000 for a new S2000?

Of course, several options could be on the table. Honda could proceed more modestly with a less-powerful engine, using an approach similar to the Mazda MX-5, for example.

It will now be fun to see whether or not this latest speculation is well-founded as we get closer to 2024 and the brand’s 75th anniversary. No doubt, a reborn S200 would generate some needed enthusiasm around the Honda brand. 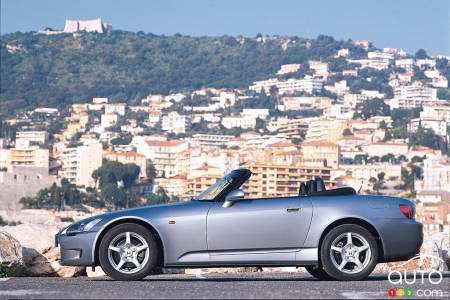 Reports Have the Civic's 2.0L 4-Cylinder Engine Coming to...

Honda is planning to graft the Civic's 2.0L 4-cylinder engine into the new 2023 HR-V, according to a report by CarBuzz. If so, this engine will definitely gi...

Honda has registered the CR-Z name again with American patent authorities. While it's anyone’s guess if the company is really planning the return of the spor...