Tesla is recalling over 475,000 vehicles as part of two separate recalls, the largest of which involves potential failure of the rearview camera.

That recall affects over 350,000 2017-2020 Model 3 cars. According to Transport Canada, “On certain vehicles, a cable in the trunk harness could become damaged over time. If this happens, the rearview camera image may not appear on the center display when backing-up.”

The other recall affects nearly 120,000 2014-2020 Model S vehicles, and it addresses a potential issue with the front hood latch. Again, as per Transport Canada, “On certain vehicles, the front trunk (frunk) hood latch may not be positioned properly. As a result, the secondary latch may not hold the hood closed. This could cause the hood to open suddenly while driving if the primary hood latch is released.”

Tesla says it is not aware of any accidents, injuries or fatalities in connection with either the rearview camera or latch issue.

In both cases, Tesla will contact owners via email and arrange for the problem component to be inspected. In the case of the rearview camera cable, the harness will be replaced if needed, and either way a harness protector will be installed. As for the hood latch, it will be reassembled with the latch mechanism repositioned if needed.

It’s been a busy month for Tesla on the trouble-shooting front. Just recently the automaker agreed to disable the video-game feature on its multimedia screen after reports revealed that drivers were able to access the games while the vehicle is in motion. And of course, the NHTSA continues to investigate the company’s Autopilot driver assistance system after several vehicle crashes involving Teslas and emergency vehicles were reported. 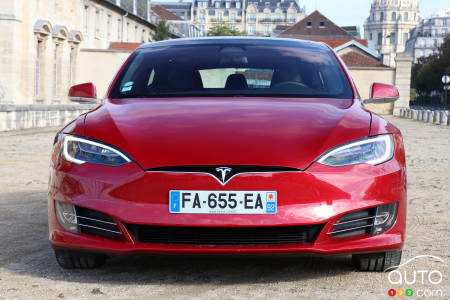 After Formal Request from the NHTSA, Tesla Says It Is Rec...

After a formal request from NHTSA, Tesla says it will recall nearly 135,000 vehicles. The issue, related to a possible failure of the interior’s touchscreen,...