Now that we’ve seen the model in greater detail with the unveiling yesterday, there’s more good news for fans of the new Hyundai Ioniq 6. Data on its range has been released and it reveals that the sedan can lord it over the first model to launch under the Ioniq all-electric sub-brand, the Ioniq 5.

The secret? Without a doubt, the car's aerodynamic design. While the Ioniq 5 is an SUV and comes in a boxier package, the Ioniq 6 is a sleek sedan that looks like it was designed to slice through the air with a minimum of resistance. Which it was, of course. The car is 191.1 inches (4854 mm) long, or 8.6 inches (218 mm) more than the SUV, and it is 4.1 inches (104 mm) lower to the ground from the top of its roof. The result is a drag coefficient of 0.21, which is quite exceptional.

There are other factors, such as improvements made to the powertrain to increase its thermal efficiency. But otherwise, on paper, the powertrains of the two models are very similar and they both sit on the same platform (E-GMP). 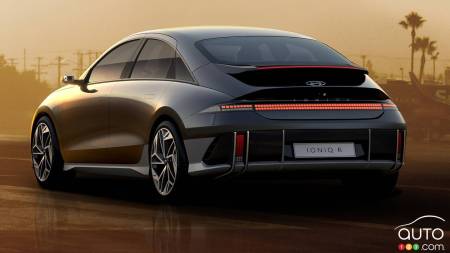 Other facts and figures
The Ioniq 6 will be offered with two battery capacities. The rear-wheel drive model benefits from either a 53.0-kWh or 77.4-kWh pack, while the AWD configuration can be twinned exclusively with the latter. As with the Ioniq 5, the 800-volt powertrain architecture allows for use of fast DC charging stations (350 kW), via which battery charge can be increased from 10 to 80 percent in just 18 minutes.

Now about that range. Hyundai expects rear-wheel drive versions equipped with the 77.4 kWh battery to be able to travel more than 610 km according to results of the European WLTP cycle. This will be less here, of course, but we should point out that the Ioniq 5, with the same cycle, was predicted to go 517 km. With the official range of the Ioniq 5 at 488 km in North America, it's logical to think that the Ioniq 6 should offer some 575 km.

A figure like that would constitute a decent cure for range anxiety.

We'll have more to tell you about the Hyundai Ioniq 6 when it gets its North American presentation, likely at the Los Angeles Auto Show in November.

Hyundai has introduced its latest new EV, the Ioniq 6 “Electrified Streamliner”, as it refers to it. The model is clearly focused on delivering a super-comfo...