For or against, government incentive have a direct impact on sales of electric vehicles Automotive columnist: Daniel Rufiange , Updated: 2021-11-25

In 2018, Doug Ford's Ontario Conservative government scrapped the electric vehicle incentive program that was in place at the time. That program provided up to $14,000 in incentives to buyers of electric models.

The Ontario Liberals intend to revive such a measure if they are elected in next year’s provincial election. Specifically, they have pledged to reinstate a program that would give buyers up to $8,000 off the purchase price of eligible models.

Ontario Liberal Party leader Steven Del Duca said the program would apply to electric vehicles worth up to $60,000, an approach identical to that in Quebec. The government would also offer different levels of support for purchases and leases. It would also offer up to $1,500 to consumers for the purchase of charging equipment.

“Creating a new electric vehicle incentive program is a win-win for Ontario families. It will advance the fight against climate change, create good paying jobs and deliver needed pocketbook relief.”

Del Duca said the eligibility criteria for the incentive program would be the same as those laid out under the federal government’s iZEV program, which offers up to $5,000 to buyers who switch to zero-emission vehicles.

Politically, the promise is interesting because it puts the Liberals in direct opposition to the Conservatives, which will force many voters to choose sides based on their interests, but also on their beliefs. Doug Ford's government has long held that it’s more important to help electric vehicle manufacturers than consumers. 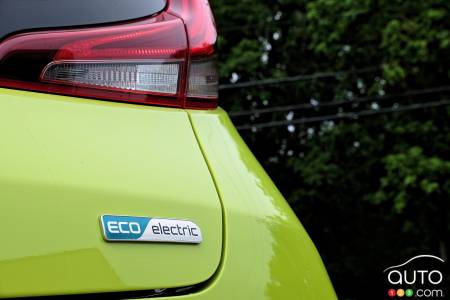 Both the Green and NDP parties recently came out in support of reintroducting a provincial incentive for electric vehicles, one that would bring Ontario in line with other major jurisdictions.

We know that in British Columbia and Quebec, consumers can benefit from significant measures. In British Columbia, the discount can go as high as $3,000, while in Quebec the ceiling is $8,000. And the effect on sales is direct. Automotive News, which reported the news, explains that last year, sales of zero-emission vehicles accounted for 8.4 percent of new light-duty vehicle registrations in B.C.. In Quebec, the figure is 6.8 percent. In Ontario, where there is no measure other than the federal $5,000 (on vehicles under $45,000), only 1.8 percent of new light-duty vehicle registrations were electric.

The Ontario Liberals have also promised, if elected, to introduce a 30 percent subsidy for new charging infrastructure on municipal streets, apartment blocks, workplaces and places that serve as transit points for motorists across the province.

If you’ve ordered a hybrid, electric or hydrogen vehicle in Ontario and are still waiting for delivery, be careful! If it is not registered, plated and deliv...