Polestar has shared an image showing its future 5 EV and confirmed that production of the model, which is derived from its earlier Precept Concept, will begin in early 2024.

Recall that when the Precept was introduced last year, the idea was to showcase the brand’s design language for its coming line of EVs, and to establish the company’s eco-conscious bonafides though the inclusion of several recycled or otherwise responsible materials.

Another idea was perhaps to gauge interest in an all-electric grand tourer from the brand, and by all accounts the response was so positive that here we now are, with a model headed for production. Late last year, Polestar CEO Thomas Ingenlath had this to say about the Precept and reaction to it:

“The public said ‘We want it’, so we decided to build it.” 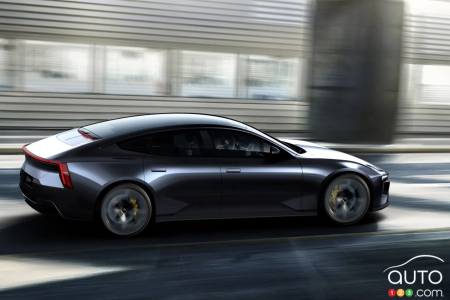 Today we learned also that the name will be Polestar 5, and the model will join the Polestar 1 luxury hybrid coupe, Polestar 2 all-electric fastback and Polestar 3 all-electric SUV in the brand’s small but growing model lineup.

The timeline for developing the production version of the 5 may be long, but Polestar is promising it intends to keep it as close a relative to the Precept concept as possible.

That said, the new image does show that the prototype’s exterior side cameras have given way to actual mirrors, and the suicide doors are no longer. We can still make out a full-width light bar on the back, however, as well as disappearing door handles.

There’s only the tiniest glimpse of the interior in this teaser image, but enough to make think Polestar’s not lying when they say the end product will resemble the embryonic design study shown last year. Except a number of recycled and eco-friendly materials to carry through as well. 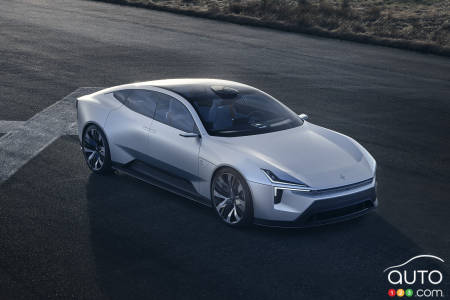 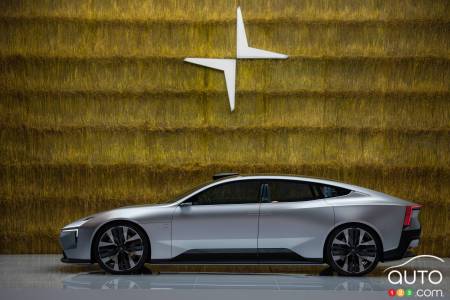 Design-wise, the image does give a good impression of where the designers are going with the 5. Here’s the company’s take:

“The Polestar 5 electric car embodies the company’s increasingly independent and muscular design language, cues of which will already be seen on Polestar 3 electric SUV that is expected to be launched in 2022.”

The automaker isn’t saying much yet regarding performance, range and such, which isn’t surprising given how far down the road the model’s launch is. We’ll have to wait for such details, but it’s possible, given its format, it will deliver numbers similar to what the new Porsche Taycan Cross Turismo offers (between 469 and 751 hp, and up to 425 km of range).