The GV80 is not just the first production SUV from Genesis, it’s also the first model from the brand to benefit from a new 3D instrument cluster. The display is the work of supplier Continental, for which it’s the first time its creation is included in a production car.

The technology used by Continental is based on parallax barriers that divide the image into two different, slightly offset views, creating a 3D image. For a more precise adjustment of this image, the system uses an interior camera that detects the driver's field of vision.

The camera also detects whether the driver is focusing too much on the instrument cluster. If this happens, the camera alerts the driver; further, it identifies potential moments of distraction or fatigue.

“With our volume-production display featuring autostereoscopic 3D technology, we are raising human-machine interaction to a whole new level and laying the foundations for intuitive communication in the connected cockpit of tomorrow,” commented Frank Rabe, head of the Human-Machine Interface Department at Continental. “To ensure that this gain in safety and comfort does not come at the expense of a lean electronics architecture, we integrated various displays in the center console or dashboard into our Cross Domain Hub.”

Continental is currently working on a second-generation 3D instrument cluster, which will integrate all centre console displays into a single unit. With it the driver can reconfigure the layout of content across multiple screens, for example, by dragging navigation maps from the center screen to the instrument cluster in front of the driver.

At the same time, the company is also developing a new generation of 3D screens for the front passenger and rear seat occupants. Continental promises that this new technology will enable passengers to use a wide range of digital services, including video conferencing, online shopping, augmented reality games and 3D movies. 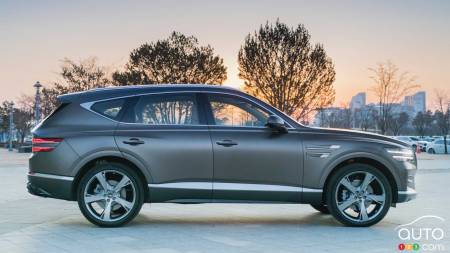 The vehicle that Tiger Woods was driving when he crashed was travelling at about 140 km/h when he went off the road. The speed limit in the area is the equiv...

The Automobile Journalists Association of Canada today announced the winners of its 2021 Canadian Car and Canadian Utility Vehicle of the Year awards. Congra...