In 2020, a young man from Saint-Joseph-de-Beauce, Québec, became the talk of the town. Of the province. Even of the country. At the tender age of 19, he became the first Quebecer and the youngest Canadian to win a race in one of the three main NASCAR series, the Gander Camping World pickup series. It happened at the Talladega Superspeedway, in Alabama.

At that point, his season was already going quite well;, but things got even better from that point on. In fact, the win changed everything. Radio-Canada’s "Tout le monde en parle" talk show even decided to invite the young driver on to talk about his feat, recognizing that something special had happened. It must have been for a network that normally pays no heed to NASCAR to perk its ears up.

Yes, Raphaël started to get a lot of attention.

Last December, we took some time to meet the young man, and headed to Saint-Joseph-de-Beauce in Quebec to do so. This week, we feature a 5-part series on his life and accomplishments. If you didn’t know him then, you will get to know him this week. Today, the first years.

Raphaël Lessard was born on July 5, 2001. When he was two or three years old, he went on road trip with his father, who drove big rigs for a living. "I was so small we had to put the child seat in the truck. I was fascinated to see my father shift gears, with the sound of the truck, and by pretty much everything.

In fact, Raphaël grew up in an environment where vehicles are omnipresent. His father raced for fun, and come wintertime, it was on a snowmobile that the young boy experienced his first sensations related to speed. Ironically, he dreamt mainly at that time of an NHL career, like so many young Canadians who put on a pair of skates. However, "when I was on a snowmobile or ATV, or in a car, I forgot all about hockey”. 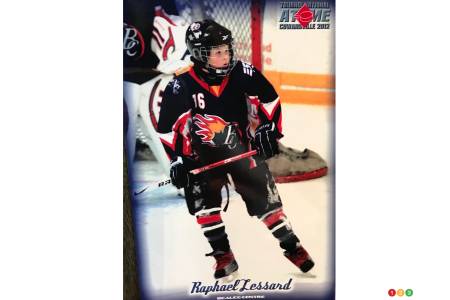 Nevertheless, he never really thought making a career in motor racing - at least not until July 5, 2011, the day Raphaël turned all of 10. "For my birthday, I asked for a family outing at the go-kart track. I had driven one when I was 9 years old and I was pretty fast and I wanted to do some more, so we all met up at the Château-Richer complex in Quebec City where there’s a nice track.”

That day, several family members participated in a friendly race. Four “pros”, as Raphaël describes them, were invited to join them. “The person in charge told us not to worry, that they would be quickly be in front of us and out of our way. That's all it took to get my father riled up; he battled with three of them for the win. For my part, I finished ahead of the fourth pro. My mom couldn't believe it. »

In fact, the more the race progressed, the faster Raphaël was. On that day, he showed something we all later see, in 2020. And that was his ability to adapt. More on that later on this week.

His mother wasn’t the only one who saw something special that day; Dad took notice too. The following winter, he acquired a race car prepared by a cousin who ran in a local racing series. In addition to preparing the car for Raphael to eventually drive it, they had to find a way to rig it up in such a way that he would be able to see above the dashboard.

Then came the summer of his 12th birthday, in 2013, when he participated in his first organized races. From the get-go, he drew attention. He was fast, that much was clear. His father’s instructions to him: fight hard and finish on the lead lap. In his first race, at 11, he found a racing line that allowed him to pass others on the outside. His third time around, on his 12th birthday, he won, beating drivers who were two, three and even four times his age. That July 5, 2013, on the track at Valley-Jonction, in the heart of the Beauce region, something truly special happened. Some competitors did not believe it; some were just in admiration.

Seven years later, those who were schooled by a pubescent teen that day possibly felt they could breathe a collective sigh of relief. They hadn't been bad that summer night in the Beauce - they simply had been beaten by a gifted driver who just happened not to have a driver's license… yet.

In the Asterix comic book series, loyal companion Obelix enjoys permanent superhuman strength after falling into a vat of magic potion when he was a child.

Young Raphaël Lessard also possessed an innate strength, that of being immediately fast from the moment he first got behind the wheel of a car. The kind of thing that can’t be taught. All he needed was an environment where it could be developed and refined.

When he returned home that evening of July 5, 2013, it’s easy to imagine young Raphaël was dreaming of something other than the Stanley Cup. What he didn't know at the time was how fast things were going to happen from that point on.

Tomorrow, his incredible ascent in his first professional seasons.

Introducing Raphaël Lessard: what to expect this season

Auto123 shines the spotlight this week on race car driver Raphaël Lessard, a young Canadian we met recently at his home. Today, chapter five: what the expect...

Meeting With Raphaël Lessard: the 2020 Season in NASCAR’s...

Auto123 shines the spotlight this week on race car driver Raphaël Lessard, a young Canadian we met recently at his home. Today, chapter four: the 2020 season...