Within the Jaguar brand, extreme performance variants carry the SVR tag. This week the British automaker confirmed what had been long rumoured: an SVR edition of the I-Pace electric SUV.

This is a pretty radical departure for the performance divisions, whose variants have always been based on combustion-engine powertrains and, of course, an accompanying symphony of engine sound that is designed expressly to set pulses racing.

For the moment we have no details regarding the when, where and how of the new version’s debut, but we’re assured by the head of Jaguar’s SVO (Special Vehicle Operations) division, Michael van der Sande, that the I-Pace SVR is not a question of if but when.

Not that the news is much of a surprise, however. The SVO division was behind the development and production of the cars that participate in the I-Pace Trophy race series. That experience gave the division’s designers the tools to come up with a production model.

"(T)hey've taught us a lot. We’ve already learned plenty about battery management, heat management and software development that could be useful for road cars. When the call comes, we’ll be ready."

Extreme performance
The Jaguar I-Pace in its present incarnation is already a high-performance vehicle, benefiting as it does from 294 hp and 512 lb-ft from its electric powertrain. That allows it to go from a stop to 96 km/h in only 4.5 seconds. That time would apparently shrink significantly in an SVR version to a jaw-dropping 2 seconds or even less.

Jaguar has made reference before to the possible development of a vehicle able to break that t2-second barrier, but the vehicles in question must be built and equipped accordingly to remain safe, especially since, as production cars, they will find their way into the hands of less-experienced drivers.

Other versions of the I-Pace are said to be in the works as well, including a luxury edition. Jaguar is also looking at the possibility of creating a variant specially equipped for off-roading. 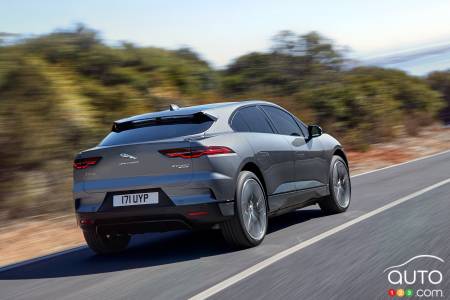