This year’s Initial Quality study carried out by J.D. Power represents the 36th year the organization has conducted the exercise of measuring initial quality of new vehicles based on the number of problems reported by vehicle owners. And for a variety of reasons, 2022’s study shows the worst results in the survey’s history.

The average number of problems per 100 vehicles increased by 11 percent this year, to 180. Last year’s average was 162. Looking more closely, electric vehicles generated nearly 40 percent more complaints per 100 vehicles than gasoline-powered ones.

J.D. Power points to several factors that explain the drop in initial quality, notably the ongoing effects of the pandemic, chronic supply-chain problems, higher vehicle prices and personnel movement and perturbations. It’s important to note that the survey looks only at how people feel (or, what they like and don’t like) about their brand-new vehicle, and says nothing about longer-term reliability or owner satisfaction.

A certain drop in owners’ satisfaction with their new vehicle was to be expected given the obstacles industry players have had to hurdle over during the past year or two. Wrote J.D. Power’s director of global automotive, David Amodeo:

“Given the many challenges automakers and their dealers had to face in the past year, it’s somewhat surprising that initial quality didn’t fall even more dramatically. Automakers continue to launch vehicles that are more and more technologically complex in an era in which there have been many shortages of critical components to support them.”

EV learning curves?
Another factor that we might inject into the debate involves those EVs. With many car buyers switching for the first time to electric vehicles, it’s probably to be expected there will be an adjustment period, with owners having to get used to new systems and interfaces. Imagine all PC users suddenly switching to Macs; then imagine all the swearing and frustration sure to ensue as users wrestle with an unfamiliar interface.

Over 84,000 new owners of 2022 model-year vehicles were surveyed and asked to report any problems they discerned during the first 90 days of ownership. The problems covered a range of aspects, from mechanics to the infotainment systems. As it happens, once again this year it’s that latter category that drew, by far, the most complaints, with 45 problems reported per 100 new vehicles. Six of the top 10 problems reported involved the vehicle’s infotainment system. 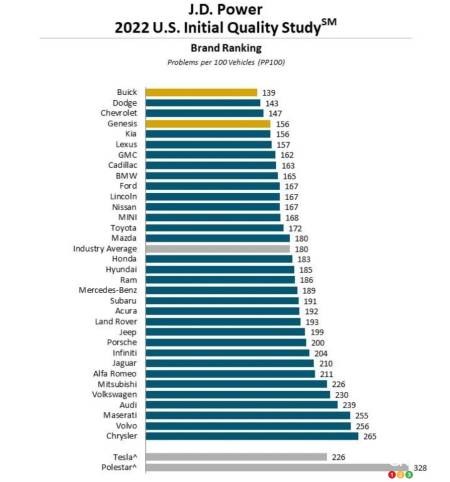 The worst
Other than EVs in general, there are some of the usual suspects residing at the bottom of the brand initial quality ranking. Chrysler has the dubious honour of holding down the very bottom position, with 265 complaints per 100 vehicles. Sitting above it are Volvo (256), Maserati (255), Audi (239) and Volkswagen (230).

In case you’re wondering, Tesla was not included in the official ranking due to being ineligible according to the J.D. Power’s study criteria (because Tesla does not allow J.D. Power access to owner information in states where that permission is required by law). The EV maker did, for the first time, get a rating, however: 226 problems per 100 vehicles. 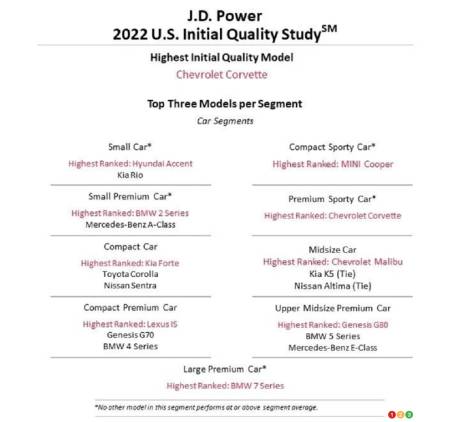 Photo: J.D. Power
The best cars for initial quality, according to J.D. Power 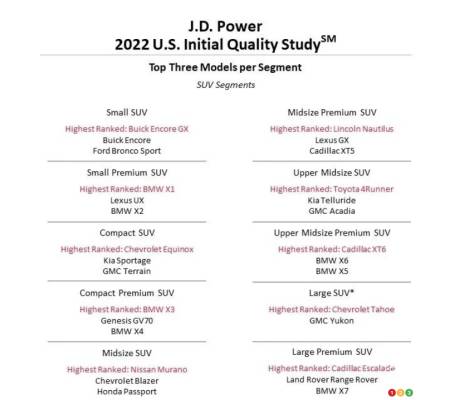 Photo: J.D. Power
The best SUVs for initial quality, according to J.D. Power 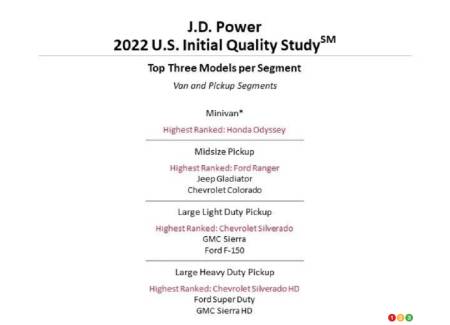 The Initial Quality study is based on a 223-question survey organized into nine vehicle categories: infotainment; features, controls and displays; exterior; driving assistance; interior; powertrain; seats; driving experience; and climate. The study is designed to provide manufacturers with information to facilitate the identification of problems and to drive product improvement. Questionnaires were given out and collected between February and May 2022.

J.D. Power recently released the 2022 edition (the 27th to date) of its U.S. Automotive Performance, Execution and Layout (APEAL) Study, which looks at how n...